The Renegades from Harbinger return to the Valiant Universe with a shocking first issue.

Before we get into this review, there are a few things for the uninitiated. And if you’ve started plunging into Valiant Comics’ universe in the last few months, then that probably describes your familiarity with Harbinger and the Renegades. They’re a team whose history is both simple… and complex.

Starting out in the pages of Harbinger, the Renegades were a tight-knit team of super-powered humans. ‘Psiots’ is the label, and when someone has that special gene, it basically activates a superpower. Abilities are varied and can involve telepathy, super-strength, and even flight. It’s rare that people actually know that they have Psiot powers though, and it’s not easy to ‘activate’ them. So, the population is small is what I’m saying. 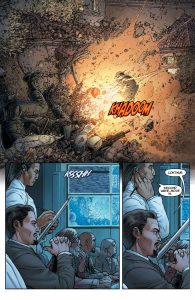 The Renegades’ arch-enemy is/was one Toyo Harada. Kind of a big bad for the whole of the Valiant U, Harada believes that a better tomorrow starts with a culling of the herd so to speak. He’s a multibillionaire who wants to wipe out humanity and start over with his own super-race. Yep, he’s a few bad guy archetypes rolled into one (and a very cool character).

A team no more

After a war of sorts, Harada was outed to the public, who finally learned of Psiots’ existence. And though he was far from beaten, the Renegades were. Fragmented, the team split and went their separate ways. And this brings us up to now.

No longer a team, the Renegades have more or less drifted away. Faith and Ax are still heroes, but aside from them? Well, the rest are basically living in private. Except Torque that is, who has a superhero reality-show. Fits.

Things don’t stay this quiet though, or we wouldn’t have a comic. Private gangs are trying to activate Psiots, the government is taking note of anyone who’s been tagged by Harada’s company, and things are rumbling behind the scenes. Tensions are rising, and there’s no one to help those caught in the middle. That used to be one of the Renegades’ jobs. 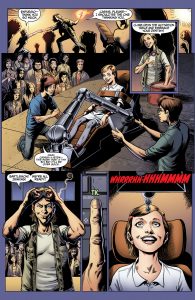 Aside from reintroducing readers to the team, as it existed before the split, this first issue of Harbinger Renegade is a shocker. There are two standout moments especially, neither of which I’ll spoil completely, that’ll have your jaw-dropping. What I will say though, is that trying to activate Psiot abilities isn’t easy or safe. Well, that and that the former leader of the Renegades is becoming absolutely god-like.

Related Article:  Metal's fallout to lead into a whole multiverse of problems in Justice League: No Justice

More than one team worked to craft this one into the gem it is. And they’ve all done a stellar job.

We’re treated to a fantastically stylish intro first, which recaps things and fills in some blanks. That’s brought to you by Rafer Roberts and artist Raul Allen. After that, we get a pretty lengthy prolog, which is all about a hit that Harada and his forces try to put on one of his enemies.

I have a feeling that we’re going to see a lot more on the target of that attack in the future. Written by Rafer Roberts, the prolog is illustrated by none other than Juan Jose Ryp. This is the second book this month that I’ve read from Ryp, the first being Valiant’s Britannia #2, and I continue to be knocked over by his work.

As for the main bulk of the book though, that’s brought to life by writer Roberts as well, though penciled by Darick Robertson. Robertson’s work isn’t as detailed as Ryp’s, but it’s still plenty enjoyable. It’s a lot more cartoony, which isn’t a bad thing by any means, just different. If anything, it’s more like what you’re used to seeing in a superhero comic. So, yeah.

Related Article:  Clueless on Marvel? Check out Marvel 101 on YouTube

All of this comes together though, to make a comic that you’ll just flat-out not want to miss out on. It’s not perfect, but Harbinger Renegade is very, very close. It also is the lead in for what will be Harbinger Wars 2, and that’s not something that fans are going to want to miss.