Top talent Matt Kindt and Doug Braithwaite will be teaming up to launch one of the biggest Valiant Comics events of the year. Ready for Harbinger Wars 2?

Once again, the Harbinger Wars

Kicking off as one of the publisher’s first big event books a few years back, Harbinger Wars was a milestone. Not only was it a crossover event, a first for Valiant’s modern incarnation, but it was darn good reading too. HW introduced new themes, new heroes and villains, and set the stage for the Valiant U in the long term.

And now it’s back, with an all-new bent and ready to make waves yet again. This second round will start off with a bang too, as Matt Kindt and Doug Braithwaite will be doing the honors for a special zero issue. The first shots fired in Harbinger Wars 2, Harbinger Wars 2 #0 is gonna be a can’t miss if you’re a fan of the psiots.

“Matt loves the Valiant Universe… He knows the clockwork that makes the whole thing tick,” Valiant CEO & Chief Creative Officer Dinesh Shamdasani told ComicBook.com. “We are telling a story as big as any we’ve ever told before, and it’s going to have massive consequences and ramifications. So we need someone who is as inventive as Matt is, and who understands the clockwork of Valiant so well, that he can take it apart. That’s how big of a story we’re building here.” 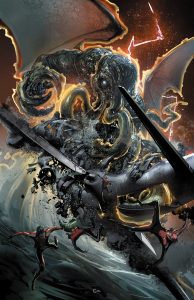 – a new, four-part jumping-on point beginning July 12th in HARBINGER RENEGADE #5! THE ROAD TO HARBINGER WARS 2 starts here in a hailstorm of bloodshed and brutality as multiple Harvey Award nominee Rafer Roberts (Plastic Farm) and superstar artist Darick Robertson (The Boys, Transmetropolitan) present the harrowing, must-read Valiant story of the year…and claim the life of a major Valiant hero! As the brutal commandos of the H.A.R.D. Corps. lead an all-out assault on an American metropolis, one of Valiant’s most beloved heroes will pay the ultimate price…and the immediate and lasting ramifications of their death will send shockwaves across the Valiant Universe as THE ROAD TO HARBINGER WARS 2 begins in full force!

Well, to be fair, we don’t actually know what’s going to happen in what’ll be a pivotal issue #5 of Harbinger Renegade. From the sounds of it though, it does seem like this death will be a big deal, and something lasting. Valiant is not afraid to shake up their universe to any degree either, as has been evidence from the publisher’s slate of stories from the last few years. So I think the chances that whoever is gonna die will stay dead… well they’re pretty high.

Also from the sound of things, this is going to be a very impactful death. Valiant will actually be wrapping the issue with an “overlay” so that people will be warned of what’s inside. Well, that and presumably to prevent too many from peeking and spoiling things for everyone else.

“The catastrophic events of “MASSACRE’ in HARBINGER RENEGADE #5, in which a major Valiant character dies, will have massive repercussions for not just that particular character, but for the entire political and social climate of our universe,” said Valiant Editor-in-Chief Warren Simons. “How the universe moves on from there is an enormous, status quo changing event. And it’s going feed directly into HARBINGER WARS 2.”

And all of this will lead into Harbinger Wars 2

If you can nab a copy of HW2 #0, you’ll be in for a special story. The issue will hold a “secret chapter told in advance of 2018’s seismic event!” So, this zero issue is a pretty important supplement to the story of Harbinger Wars 2. Again, if you can get one.

Don’t forget that Harbinger Wars #0 is a mail-away exclusive. A rarity in today’s market, the issue can be gotten (as of now anyway) only via a series of coupons that were included in Harbinger Renegade #’s 1-4. Did you get those issues? Did you mail away for the book? Then you’re good to go.

Missed it? Well then you’re out of luck, for now anyway. Not that we have any info to the contrary, but I have to imagine that at some point, you’ll be able to read what Kindt and Braithwaite have cooked up for issue zero. For now though, mail-away is the only way to get one.

Infinity Wars Prime cover unveiled, showcases Thanos himself (who else?)