Spock was just announced last month, and now a second classic Trek character has been declared as a part of the new Star Trek wing of the One:12 Collective. 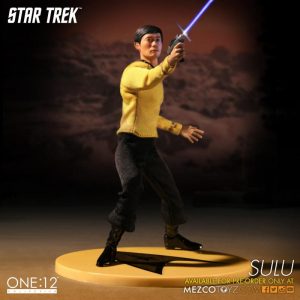 Just about the finest clothed action figure line out there at present, the One:12 Collective from Mezco Toyz is as good as it gets. The figures have real cloth clothing (that doesn’t look ‘off’) and tons of articulation. Packed with plenty of accessories too, they’ve become a pretty hot commodity and the line is exploding in 2016, from it’s somewhat humble start with The Dark Knight Returns and Judge Dredd.

With Star Trek and Batman v Superman: Dawn of Justice now a part of the offerings, there’s a bright future ahead for the figures. Now Trek fans have something else to be excited about, with Hiraku Sulu.

From the original Star Trek series and the bridge of USS Enterprise NCC-1701 comes Chief Helmsman, Hikaru Sulu, one of the iconic series’ most celebrated crew members. The groundbreaking character of Mr. Sulu, portrayed by the inimitable George Takei, bravely guided the starship during its original five-year mission.

Sulu was originally the department head of Astrosciences; he was also an accomplished botanist, fencer, noted expert on projectile weapons, and pilot of “antique” aircraft. He assumed command of the ship on at least four occasions, repeatedly proving himself a skilled and valuable member of the Enterprise crew.  Hikaru Sulu went on to become Captain of his own vessel and was honored with a holographic portrait in Starfleet Headquarters.

Digitally modeled to craft an exceptional actor likeness and assembled on a One:12 Collective body with over 28 points of articulation, numerous accessories as well as interchangeable parts. This figure features a series accurate outfit to create an amazing collectable.

Sulu has a five panel, collector-friendly box that he ships in, so you don’t have to worry about ruining the packaging if you want to display the helmsman on your shelf. He’s also got a pile of accessories. Most of them are of the extra parts and Starfleet issue variety, but you better believe that his fencing sword is in there too.

Expect to see Sulu become available this June or July, and you can get your pre-order in right here.

PS Plus: Free Games Line up for December 2016