Ready to start the hunting all over again? Nintendo’s latest set of Amiibo (sporting some of the best designs yet) are coming in September. 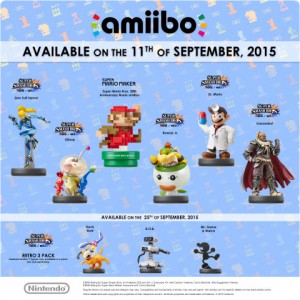 There’s… pretty nothing to not like about this latest series of Amiibo, which is now officially dated for September the 11th. Well, that’s true if you don’t count the fact that some of them might be nearly impossible to get your hands on.

To be fair, there have been way more of the little figures appearing at retail as of late, as Nintendo has made it a point to try and fix their shipping and distribution ‘issues’. Still though, I don’t hold out a lot of hope that I’ll be able to snag all of these. Hopefully I’ll just be able to get Mario, Doctor Mario, Bowser Jr., and that Retro 3 pack. That’s probably wishful thinking, but what can I say, I’m a dreamer.

In total, the releases for the 11th will include:

Related Article:  The Brotherhood of Steel arrives in Fallout 76 next month

Also really cool, is that 30th Mario is set to be delivered in two colors. One will sport the standard Mario color way, while the other will replicate his look in the original game, brown shirt and all. He’ll also be compatible with the upcoming Super Mario Maker for the Wii U, which is nifty.

And shortly after these guys hit stores (for how ever fleeting a period of time), that awesome 3 pack will arrive. With a September 25th release date, the trio of R.O.B., Duck Hunt, and Mr. Game and Watch should be a pack that pretty much every Nintendo fan is going o want. And you know what that means.

Anyway, lots to like in this series, so good hunting.

System Shock is back, as third game in the series is announced

Take-Two set to reveal a “new franchise” this month