So, I’m pretty sure this has never happened in the world of video games. Correct me if I’m wrong, but outside of a few characters in Marvel vs Capcom titles, I don’t think the Darkstalkers have ever been in the same game as the Street Fighters.

And while this might not be a video game, fans will finally be able to see the two groups face off in Udon’s latest comic. As you can see too, issue starts things off right with a pretty explosive cover. You might have to squint a bit, but I think they covered all the bases with this one.

Of course, this being Udon, this won’t be the only cover out there. What you see here is series artist Edwin Huang’s “Wraparound Story” cover. So this is cover “A”. The others? Well we don’t have images of them as of yet, but we know what’ll be on ’em. 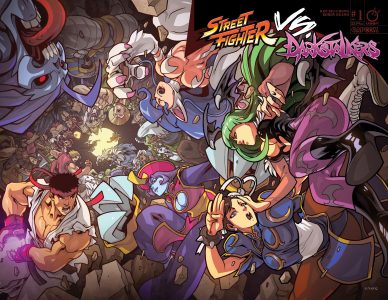 Cover art will fly at this location

Brought to you by Rob “Robaato” Porter, the Midnight Bliss cover (cover “B”) will run for the first four issues of the crossover, and it’s going to be a pretty interesting trip. Midnight Bliss will feature a selection of characters affected by vampire lord Dimitri’s “gender swapping” powers. So, you can imagine where that’s headed.

Also on the block, will be a blank set of covers, a “movie poster” cover from Joe Vriens that’ll be a tribute to a classic horror movie posters, and a “Guest Artist incentive cover (CVR E)” with Chun-Li and Morrigan. That one will be from cover artist du jour Stanley “Artgerm” Lau.

So lots to like there for the first issue of the eight part series, and it’s not even taking into account the pair of retailer-specific covers. Both Fried Pie Comics and Focus Attack will have special illustrations as well.

It all starts next month with a special “Zero” issue, that’ll lead into the mini-series proper. Part one of that will hit in April.

Related Article:  Here’s your first look at the upcoming Evil Dead: The Game