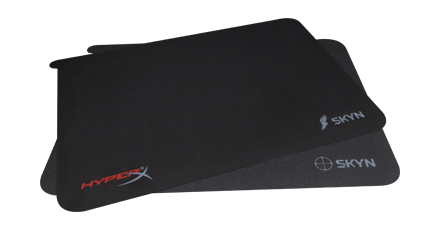 I don’t know about you, but I have a very specific picture in my head as to what kind of company Kingston is. I basically picture hard drives and flash drives when the name pops up, not gaming accessories. That’s exactly what we’re talking about here though, mouse pads in particular. And as mouse pads go, these are pretty interesting.

Yes, these, plural. The Hyper X Skyn mousepad is actually two mouse pads included in one ultra-thin package. The pads are both the same size, though they’re somewhat different in texture. The difference is the main talking point and actually is pretty noticeable as you mouse over things and generally go about your daily play and/or work.

The first pad is designed more for speed. This one allows for faster movement and twitchiness, and is perfect for gamers looking for a near-zero friction surface that will give them an edge (however slight) in FPS titles and other fast-moving games. Personally, and even though I love FPS’, I’m not much of a multiplayer guy. So with that in mind, I didn’t really take to the zippy nature of this pad, though I’m sure others would get quite a bit out of it as it most definitely does its job.

Second up on the docket is a more control-oriented pad. This one I liked quite a bit, even for FPS, as it gave me a nice gritty surface to play on. For strategy affairs, this one’s tops (especially since that’s what it’s really designed for), but as I said, I liked it for a bunch of games in different categories. It’s just a nice little mouse pad.

Little might be a poor choice of words though as these pads are anything but. They’re not of the massive, monster-sized mouse pads that companies like MadCatz makes mind you (you know, those things that’ll take over your desktop?), but they’re not exactly modest either. I imagine you could actually cut them down though, if you really wanted to, since the Hyper X Skyns are actually incredibly thin.

We’re basically talking, wafer thin here. Kingston took the ‘skyn’ name and ran with it, because these bad boys are just like a second skin that you stick on your desktop. Oh yeah, you actually have to stick them to your desk with adhesive in order to use them.

See, the Skyn pads are so ridiculously thin and light, that using them as a standard mouse pad simply wouldn’t work. Believe me, I tried, but as you mouse on them you start to actually move the Skyns all over the place. It’s annoying, and it’s also not how they’re intended to be used. Fortunately, a quick wash down and drying of the surface that you play on, followed by peeling off the adhesive backing and sticking one of the pads on, takes care of that.

The Hyper X Skyn isn’t for everyone, that’s for sure. You’ve got to have a dedicated gaming or work space in your house where you don’t mind having a semi-permanent attached, and you have to basically not be too keen on changing it around too much.

If that’s you though, then the Skyn does its jobs admirably. You’ll get a solid sensation of a frictionless experience with one, and a good deal of control out of the other. All in all, these are pretty darn good and a great start for Kingston.

Personally, I’m pretty excited to see what else they come up with.

Sunday Review: The Brutal Gamer Archive for the week of 5/26/14