The coolest X-Man breaks out in Iceman #1.

The teen version of Bobby Drake will be starring in X-Men Blue in 2017. That you already should be aware of. But while he’s a part of that team book, the adult Iceman will be taking up some solo adventuring in his own standalone title. One of the original X-Men from way back in the very first issue, Bobby has been through a lot. And yes, that includes being ‘outed’ by his own younger self.

From the sounds of things though, this new series isn’t going to get too deep into self-reflection. In fact, like the rest of the X-titles to come, it sounds like a Marvel mutant comic of old. Man, is that a welcome change, given the drama that has consumed the team’s corner of the Marvel U.

Speaking with Nerdist, series editor, Daniel Ketchum said, “Iceman has never had a solo ongoing series before and we’re going to make sure we use every page to its fullest. [He wants] to be known as more than just ‘that X-Man who tells jokes.’ When Iceman’s not bringing up the next generation of X-Men at the Xavier School, he’ll be spanning the globe, icing himself up and taking down the biggest, baddest villains the Marvel U has to offer.” 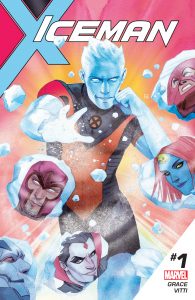 So this is set to be a real ‘superhero’ book then.

That sounds like it’ll be a different sort of ‘mutant’ comic. Most of those have more or less stuck to a definite formula. For the most part, they’re about mutants.

I have to mention here that the villains on the cover are just that too. But it sounds like it might not be outside of the realm of possibility to think of Bobby taking on the likes of Avengers villains (for example). That sounds pretty cool. And telling this tale will be a pretty well known talents.

Sina Grace has worked on All-New X-Men, and will be handling the scripts. Over on pencils, yo can expect to see the talents of artist Alessandro Vitti. You might know his name from stuff like Secret Warriors and Avengers Arena.

A major player in the new X-universe

Marvel is also playing up the level of power that Iceman has access to in a big way. They go as far as mentioning him being “one of the most powerful mutants in the Marvel Universe”. And not just once, Marvel calls him that several times in the press release. So it kind of sounds like this formerly semi-forgotten about hero will indeed be making a splash in the Marvel U.

In addition to being a globetrotting exploration with one of the most powerful mutants in the Marvel Universe, ICEMAN will also be studying how Bobby Drake’s personal life is going to help continue evolving him into one of Marvel’s best Super Heroes as Grace explained to Nerdist, “With this series, you’ll see how much knowing yourself and understanding yourself helps inform the scope of your abilities, both as a human being and also as a Super Hero. We are gonna play with it to be sure, because this guy is an Omega Level mutant at the end of the day.”

Iceman fans, your time has come. Get ready for some frozen heroics when Iceman #1 hits the stands in Spring of 2017.

Marvel looks to slide its universe into Legacy with Generations