Military fiction writer Karen Traviss joins the Joes in their most realistic and gritty comic book yet, one where Cobra has been adopted as a peacekeeping force… wait a sec, say what now? 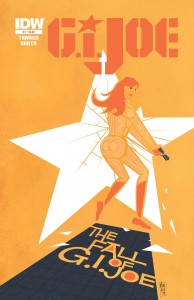 Say what you like about this new take on the Joes, but it ain’t dull. Traviss has been a military/sci-fi writer for a long time, and one that’s got the attention of actual military vets, for her attention to the realities of war and what it’s really like for servicemen and women.

“Karen understands the world of men and women in the military,” says IDW Senior Editor John Barber. “She gets what their reality is like—which is why she’s held in such high regard by veterans, as well as fans of character-driven action.

“When John [Barber] asked me to write the series, it was one of those spooky coincidences,” said Traviss. “I’d literally just finished writing a scene for my new novel,GOING GREY, where two of the characters – vets now serving as private military contractors – discuss whether having G.I. Joe and Action Man as boys, influenced their choice of career. G.I. Joe is still that iconic after 50 years, because it’s about people, and it’s never shied away from the human reality of warfare. I’m genuinely delighted to have the chance to work on the franchise.”

It’s unclear just how much of that know-how will be going into G.I. Joe, but from the sounds of it, quite a bit. This new book is set to take the team in some directions that it’s never even approached before and figure in “real-world dangers” and politics galore. Scarlett now leads the squad in a world where their arch-enemy, the terrorist group Cobra, has become a “peacekeeping task force”.

Bold? You bet, but it just might be exactly what the brand needs to stay relevant in a world where simple black and white heroes really don’t cut it anymore when you’re talking military fiction. As a long time fan myself, I’m definitely looking forward to it.

Little Nightmares series is over for Tarsier, but Bandai Namco may continue