Marvel’s big event of the year Infinity is finally unleashed this month. 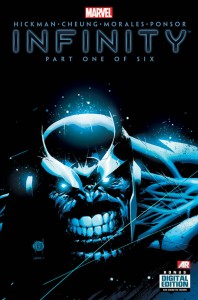 With the tag line of “The Biggest Heroes. The Biggest Threats. The Biggest Sacrifices. This is Marvel’s INFINITY”, you know Infinity is going to be a big deal. A massive crossover event that’s set to touch every corner of the Marvel U (seriously), this is one that you don’t want to miss.

Earth has been marked as an “Avengers World”, protected by Iron Man, Captain America, Thor and more from the deadliest threats facing humanity. A powerful and destructive race is on a collision course with Earth and the only thing in their path is the Avengers! But even Earth’s Mightiest Heroes realize the one hope of defeating this dire threat is to unite every great hero across the cosmos…because only with a united Avengers Universe is there any chance of survival!

Infinity #1 arrives soon from the creative team of Jonathan Hickman, Jim Cheung, Jerome Opena & Dustin Weaver and should be an absolute barn-burner in the classic Marvel style. With two fronts (the Builders and Thanos), tons of heroes (including some that rarely get the spotlight) and plenty of the biggest guns in the Marvel U present and accounted for, Infinity seems like a can’t miss.

Find out what’s in store for Marvel’s heroes when Infinity #1 (of 6) lands in stores this month.

Street Fighter annual on the way from Udon