Storm assembles a brand new team of mutants to protect a mysterious child in Marvel’s X-Men #1. 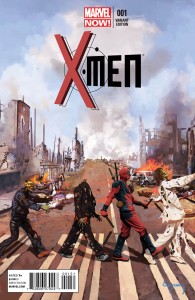 You’ll know the names on this all-female team of X-Men if you’re any kind of fan of the merry mutants. In all, the new squad will consist of Storm, Rogue, Jubilee, Kitty Pryde, Rachel Grey, Rogue & Psylocke.

An old enemy shows up at the X-Men’s door, seeking asylum from an ancient evil come back to Earth. Meanwhile, Jubilee has come home, and she’s brought with her an orphaned baby who might hold the key to the Earth’s survival…or its destruction! With an imminent alien invasion and an eons-spanning war between brother and sister around the corner, Storm steps up and puts together a team to protect the child and stop a new threat that could destroy all life in the Marvel Universe!

That’s it for details as of now on writer Brian Wood and artist Oliver Coipel’s new take on the oldest and most loved team of mutant heroes in Marvel Comics’ stable. The first issue of the book will be available on May 29th, and the special Deadpool variant cover that you see above will be on shelves at the same time.

Related Article:  SDCC: Minimate HQ to open at the Con

Not that I have to tell ‘pool fans this, but if you want that special edition, you might want to preorder. I’m sure famed penciler Arthur Suydam’s take on the fan favorite character isn’t going to be all that easy to come by.

Check out Metro Exodus’ title sequence, pick it up this February