‘Eclectic’ is the word that I’d use to describe this week’s updating of the track list for the upcoming Guitar Hero Live. I have to be honest here and say that I haven’t heard of a few of these bands/songs, so I’m going to assume that some of this stuff is very modern. Of course, there’s some true classics here as well with Queen and Alice in Chains appearing too, all of which seems to confirm that Guitar Hero Live will definitely have a little something for every rock and roller on its disc. Even Weezer fans.

Time to limber up those digits, Guitar Hero Live hits consoles some time this Fall. 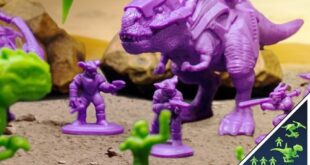 Long-awaited is the term I’d use for a new Dino-Riders line, as fans have l=been …