It’s All-Star Team-Up time once again, but this time it won’t be Flash and Green Arrow teaming to take on the bad guys, but Flash and Supergirl. 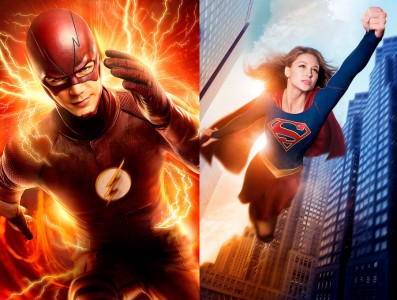 Crossing over shows and networks, two of DC Comics current TV heroes are joining forces to not only take on Central and National City’s worst, but also make fans pretty happy. A crossover between both shows have been the focus of quite a bit of fan attention since Supergirl debuted on CBS last Fall and now it’s actually going to happen.

All three of the aforementioned characters share not only corporate owners in Warner Bros and DC Comics, but also an executive producer in Greg Berlanti, which I’d imagine makes things a tad easier. Even so, this team-up does open the floor to a whole mess of questions. First and foremost is ‘is this a cross-dimensional’ trip that Grant Gustin’s Flash takes, or will he and Melissa Benoists Supergirl actually be a part of the same DCTV universe that started back with the launch of Arrow on the CW?

If they do share a continuity, that means that not only is Krypton a thing in the Flash/Arrow universe, but so is the Man of Steel himself. While the chances of seeing Superman show up on any of the CW’s programs (or even Supergirl really) is remote at best, that’s still cool from the viewpoint of a DC fan.

For that reason and a bunch more, I think most fans would prefer them sharing a universe (I know I would), though any meeting of the superheroes is pretty neat. That’s especially true since it wasn’t all that long ago that Berlanti had gone on record saying that something like this wouldn’t be in the cards for a while, if ever. Here we are though, and the episode’s coming up quicker than you’d think too, as it’ll air on Monday the 28th of March.