The third Anni-Padda brother is about to make his solo debut in Valiant Comics universe. Gotta get back in time… 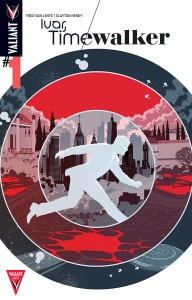 At this very moment in Geneva, Switzerland, history is being made. A thousand meters underground inside the Large Hadron Collider, researcher

Neela Sethi is about to discover time travel – and jeopardize her life in the process. But she doesn’t know that yet. Ten minutes from now, every deadbeat chrononaut, wannabe conqueror, and misguided protector of the timestream will be banging down her door. Good thing that the legendary Ivar, Timewalker, got there first…right? Now it’s down to history’s most jaded, most tempestuous time traveler to stop the worst of everything that is, was, and will be…before time runs out!

From the dawn of the dinosaurs…to the Battle of Trafalgar…to the year 4001…begin a clock-stopping odyssey into the distant past, far future, and every moment in between as the most unlikely Valiant hero of all leaps into his first history-ripping adventure on January 21st in IVAR, TIMEWALKER #1 – featuring covers from blockbuster artists Raul Allen (UNITY), Jorge Molina (X-Men), David Aja(Hawkeye), and Barry Kitson (Harbinger)!

One of the coolest new books in the Valiant Next lineup (which also includes The Valiant, Ninjak, Imperium, Divinity, and Bloodshot Reborn), Ivar is also one of the most different. Valiant’s Universe is pretty darn diverse already, but there’s no book that centers on time travel… well, till now anyway.

Ivar plugs that hole nicely, and also allows for a pretty easy segue into the world that the publisher is setting up for it’s characters in the far future of 4001 and the Rai series. It should be very interesting indeed to see where all this goes, but I have to imagine that there’s a Rai crossover coming up sometime in the near future for Ivar, and maybe a few more Valiant heroes.

Ivar, Timewalker #1 arrives on the racks on January 21st.