A brand new Star Wars POP! set is on the way from Funko that includes one of the most iconic monsters in the history of the franchise. 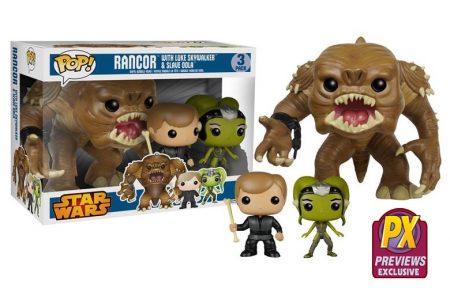 A Previews magalog exclusive, as you can see from the image above, the Rancor Funko POP! set includes not just the big beast, but also Luke Skywalker (armed with that deadly bone) and Oola, Jabba The Hutt’s former favorite dancer. While Luke and Oola didn’t exactly appear in the same scene with the Rancor, they were both fed to it… well, Jabba attempted to feed Luke to it anyway. Didn’t work out so well for him though.

As you might expect from the pic, the Rancor is 6″ in height with the other two figures coming in at 3 and 3/4 inches, giving them a nice difference in size and a film-accurate look. As a big fan of all the original Star Wars films (and the Jabba’s palace scenes in particular) I think I have to have this.

Related Article:  How to connect Meta Quest 2 to a PC

I keep capping my POP! collection, and then grabbing more as new licenses/characters are announced, and I doubt I’ll be abel to pass this one up either. If that sounds like you, then you’ll be happy to know that the set will be available this May, and can be pre-ordered right now at your local comics shop. You can find it in Previews magalog (page 518 JAN162387) and it’ll cost you $39.99 USD.

Saints Row IV basically has a lot of stuff going on