The newest X-Men team has been officially revealed by Marvel. Led by Jean Grey, it’s got an interesting lineup.

I had some pretty high hopes for this new X-Men squad when it was announced last week. As an old school x-fan, I was hoping that the Jean Grey-led X-Men Red team would be something special. Something in the classic vein, loaded out with plenty of “throwback” characters. But clearly, that’s not meant to be.

You might think differently if you’re more of a Marvel contemporary. I’m sure you’d be way more pumped about this if you know these guys and gals. But I was hoping to see the original Wolverine (he’s back now you know), along with mainstays like Bishop, Beast, and Iceman on this team. Honestly, seeing so many “new” characters in this teaser image has pretty much made me lose interest.

I’m still happy to see another x-book in Marvel’s stable though. The resurgence of X-Men titles seems to be continuing, and that’s a very good thing if you’re a fan of Marvel’s mutants. 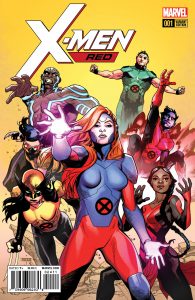 Here’s the skinny on the new comic:

Last week, Marvel announced the continuation of Jean Grey’s story with X-MEN RED, a brand new series written by Tom Taylor (All-New Wolverine) with art by Mahmud Asrar (All-New, All-Different Avengers Generations: The Unworthy Thor & The Mighty Thor). Today, Marvel is excited to reveal the heroes who will accompany the omega-level telepath as she battles against one of mutantkind and mankind’s most dangerous villains! This uniquely qualified strike force includes Namor, Nightcrawler, All-New Wolverine, her sister Gabby, Gentle (a mutant from Wakanda), and the mysterious new character Trinary, whose secrets will be revealed throughout the pages of X-MEN RED!

“We’ve also got one more fan-favorite hero joining the team in this first arc,” says X-MEN group editor Mark Paniccia. “As the threat level escalates, Jean needs to build a highly specialized team…not just those she trusts, but allies who can survive the oncoming storm.”

When one of the most dangerous X-Men villains returns to wreak havoc, Jean’s dreams of peace are threatened…and order starts to turn to chaos. It’s mutant against mutant this February in an all-new adventure that will have X-fans on the edge of their seats, as Jean Grey’s team takes on the Marvel Universe – only in X-MEN RED!