Kids designing games: a grade one student and her father. 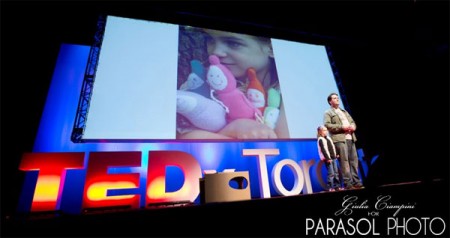 The fourth annual TEDxToronto conference took place on October 26, 2012 at The Sony Centre for Performing Arts. Celebrating the theme of Alchemy, this year’s speakers demonstrated that “intellectual chemistry” can be the catalyst for exceptional ideas and profound change. And there was one speaker in particular that hit this sentiment on the head: Cassandra Creighton, Grade One Student. Joined by her father Ryan Henson Creighton, the two shared the story of their widely acclaimed game “Sissy’s Magical Ponycorn Adventure”.  Ryan spoke about the sad state of technological education for kids, impressing that kids should learn to use creative tools at an early age.

I’ve known Ryan for a short time, but in that time he’s provided a fair amount of insight into why great games are great, and the industry/game development itself. He’s one of those rare people that cares about the state of creativity, both within ourselves and the children that will be the future of our industry.

Check out the video link here, and show your support for The Creighton’s.

Balan Wonderworld, from Sonic creators, will launch for PC on March 2021

Two for the kids, Garfield and Paddington hit the 3DS today