Ever drop a bag of hammers on your iDevice? No? Well, you probably could with this screen protector and case combo.

I wasn’t too familiar with NewerTech’s line of iOS accessories before I got the chance to check out their Impact X-Orbing Screen Armor and military grade gel case for the iPad Mini. What I’ve found after using both items though is a pair of extremely impressive safety additions to the iPad Mini that, if you take yours out and about, you probably should have.

I’ve always kept my Mini either in a fold over case or with the official fold-away cover from Apple attached. The former doesn’t allow for the smallest possible footprint, but it does offer superior protection. As for the latter, the screen is beautifully protected, but the backside of the little guy is left exposed- and that’s just embarrassing.  This setup though, changes all that and offers a third option that I’ve never had much luck with in the past- that of the ‘screen protector’ and all-encompasing case.

First up, lets take a look at the protective film that Newertech sent our way. Usually, these things are a nightmare to get onto your device and become magnets for dust and debris as you’re trying to install them. The result, is more often than not, a screen with a dozen or so bubbles in it and five or six ultra-irritating dust particles stuck underneath. Well, not so with the Nuguard KXs Impact X-Orbing Screen Armor. 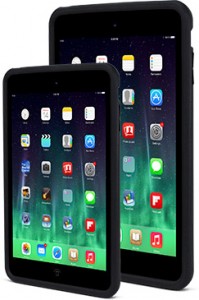 I had little issue affixing the film to the screen of my iPad Mini and there was no dust underneath when I was done. The whole process took about five minutes or so and I copiously cleaned my iPad’s screen to make sire there was nothing there when I started. I also did this whole thing in the ‘cleanest’ and most dust-free place in my house- the kitchen. Your results might vary, but I found that the thickness and rigidity of the screen protector allowed for a way better install experience than many that I’ve (attempted to) use in the past.

Related Article:  Nintendo gets back in the black with a big year

I should mention though, that just because there was no dust doesn’t mean that I didm;t have a few bubbles. They were easy to smooth out though and it ply took an extra minute or so to get rid of the offending O2 trapped underneath the new screen coating. As usual, and I don’t have to mention this if you’re an old pro at this kind of stuff- get it right the first time and do as little moving of the Screen Armor as you possibly can after your first install attempt. These things are universally very nearly impossible to ‘fix’ once install is flubbed and that goes here too.

I should also mention that the main gimmick here is that you can smash and bash your iPad (to a reasonable degree) without damage once this screen protector is on it. The idea is that it absorbs the impacts of light damage and saves your ‘Pad from not only dings and scratches, but also is impact resistant. Now, NewerTech says that you can actually hit the screen with a hammer and you’ll be fine. While I didn’t do that, I did manage to drop my iPad once the protector was on and there was no damage from the fall. My Mini didn’t land face-down, but it did tumble a bit and there was nary a scratch on the thing. I’m sure some of that was the screen protector, but I really can’t say enough about the case.

And about that second part of this review, the NuGuard KX Kinetic Energy X-Orbing Case for the iPad Mini is a dream. This small form-factor case is made of a rubbery material on the outside and a soft gel-paacked fabric on the inside. Simply put, it’s a great case and puts pretty much anything else I’ve used to shame- including the official Apple stuff.

The case slips right on with zero issues and, once on, isn’t going anywhere. It’s a snug fit that securely hugs the iPad and keeps it ensconced for total safety. The case also works beautifully with the screen protector as the film is made to be ‘case friendly’ and not run over the edges and bubble up at the corners like many I’ve had.

Ports and accessibility also isn’t a problem with the X-Orbing Case as the volume, lock, headphone jack and all the rest of the iPad’s controls are as easily accessible as if you didn’t have a case on it at all. I actually found that the part of the case that covered the volume control made it easier to hit than normal, so there’s a nice little bonus there too.

As for the looks, the X-Orbing Case is a sleek black and is very futuristic. I actually had someone comment to me that my iPad looked like “some kind of Star Trek thing” while I had the case on. That one made me smile. On the back of the case are several little grooves and swirls; these are purely aesthetic and honestly aren’t even real all that noticeable when you’re walking around with the thing. It does feel oddly nice in the hands though, and is kind of fun to run your fingers along while watching a video on the screen.

Related Article:  The Ataribox has become the Atari VCS, might go up for pre-order next month 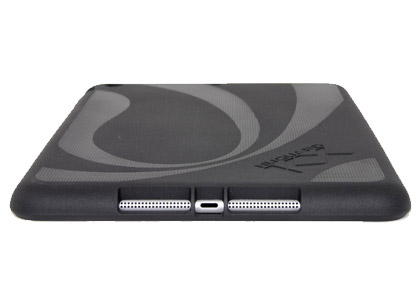 The only real downside to the case, and this is a potential issue for some, is that there’s no kickstand anywhere to be found. Unlike with the Apple cases, there’s nothing to fold away and turn into a viewing ‘stand’, so your iPad will pretty much always be laying on its back when you set it down. Fortunately, the case is a little bit grippy, so leaning it up against something is fine most of the time (that’s what I did), but that is something that I wish NewerTech would have seen to in this otherwise excellently designed case. Even a little pop-out bar in the back that you lean your iPad on would have been great.

Even with the single fault (no kickstand), I love this case/screen protector.

Outside of that one thing, there’s really nothing that I’d change about the X-Orbing system at all and the function and form of the total package are terrific all-around. Even the price isn’t bad at $39.99 USD for the case and around $24.99 for the screen armor. As someone who’s had an iPad since year one, this comes highly recommended and is well-worth the investment, especially if you’re someone who travels with their iDevice a lot.

You can check out NewerTech’s entire line here.

WRC 9 review — Not a Sunday drive

Tamarin review – Bland to the bone