Boxed copies of the hapless Larry’s latest adventure on the way to retail stores. 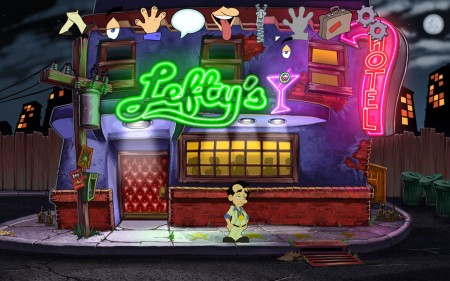 The Kickstarted title was actually already available on the PC as a digital download, but this announcement marks Replay Games first translation of the game into a retail boxed copy. Leisure Suit Larry Reloaded has thus far reveled in its renegade attitude, but now that the dark world of retail conformity is calling, can things ever be the same?

Series creator Al Lowe said, “What are they thinking? Our whole Kickstarter campaign was built around our ‘rebel attitude.’ The video even shows me mocking retail sales! What? Oh, good; at least it won’t be in Wal-Mart!”

Replay C.E.O. Paul Trowe, in a first for him and game publishers in general, could not be reached for comment. He is believed to be on some tropical beach, sipping fruit-filled beverages, and getting sand in his iPad.

Leisure Suit Larry: Reloaded is the first of the major Kickstarter-funded games to complete. Replay even sent out all the backers’ rewards last July. “We were doing so well,” Lowe said. “Why ruin our reputation with retail sales?!”

Ah yes, retail sales. The promise of profit is a dangerous gambit that few can resist. Then again, why would you? Leisure Suit Larry is a classic franchise with tons of fans who remember the days of boxed PC games quit fondly. I’m sure that there are more than a few of them who’d very much like to buy in to a boxed copy of the new Larry.