The God of Mischief is about to meet a Doom on a mission as AXIS heads towards its start. 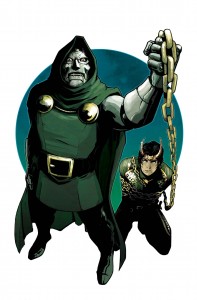 The biggest comic event of the fall is just around the corner. But first, prepare yourself forAvengers & X-Men: AXIS as the heroes and villains of the Marvel Universe set the stage for an epic clash between the Red Skull’s armies and the united front of Avengers & X-Men. Today, Marvel is proud to present your first look at LOKI: AGENT OF ASGARD #6 as the ‘March to AXIS’ continues! The creative team of writer Al Ewing and special guest artist Jorge Coelho bring the God of Mischief into the AXIS fold as Loki returns from his adventures in the Tenth Realm to face… Doctor Doom?! With his charge Valeria Richards at his side, he’ll stop at nothing to put an end to the God of Mischief! But why? What does this have to do with the Red Skull’s plot in the pages of Avengers & X-Men: AXIS? Find out as the fan-favorite series returns this September in LOKI: AGENT OF ASGARD #6!

What a welcome home for Loki. We haven’t seen too much of Doom pretty much anywhere as of the last few years, at least not in a major way, so it’s particularly cool to hear that he’s going to be featured in AXIS. Exactly what the main plot of the Red Skull’s latest plan is, is still something of a mystery too.

Related Article:  The original Guardians of the Galaxy return in Guardians 3000

All we really know at this point is that the Onslaught entity is involved and there are a heck of a lot of long-lasting effects being put into place as a result of whatever’s about to happen. And with all these major baddies on board, whatever that’s going to be has gotta be something very bad indeed.

Look for Loki: Agent of Asgard #6 on the racks this September the 24th form the team of Al Ewing and Jorge Coelho.

The Gates of Hell Open Once Again in DOOM

Sakurai’s latest pic of the day