Lords of the Black Sun is a 4x turn-based strategy game by Arkavi Studios. Originally named Star Lords, the game is based in space, but not in any star system in particular, as they are randomly generated based on options chosen during game setup. The ultimate goal is up to you – you can win through domination, research, or an allied victory (if your ally meets one of the other victory types). 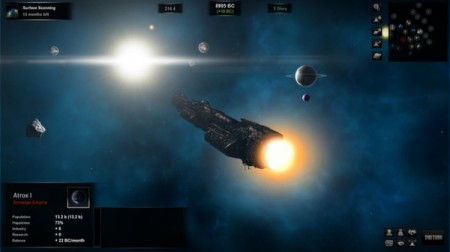 There are 8 different playable factions in Lords of the Black Sun. Each comes with their own advantages and disadvantages in areas like production, diplomacy, and happiness. When starting a new game, you choose which races are going to be played and by whom (human or A.I., as well as A.I. difficulty), but be sure to note, not all of the factions need to be active! I didn’t realize this my first time through, and it didn’t go so well.

The second time around, it was just me versus 3 other factions, and I had a much more enjoyable time. It was quite a bit easier, but gave more of a chance to learn the core game mechanics, tech tree layouts and what they unlock, as well as how diplomacy works. There is a tutorial, but it basically just provides a wall of text for everything that you click on. Although this is pretty standard for strategy games, both indie and large studio, it would have been nice if Arkavi had gone the extra mile and included some extras, to better orient players with the game. However, I did like how they provided introductory scenes for each faction as this helped to add a backstory.

For my first playthrough, I played as the Krifith Empire – an insect-type ‘colony’-minded people in which everyone works to further the colony and the queen produces the population. On the website, the game boasts that it has unique tech trees for each faction, but from what I’ve seen, they all look the same. Maybe the last technologies (which are hidden) are different – and to be fair, I have yet to play a full game as each of the 8 individual factions. 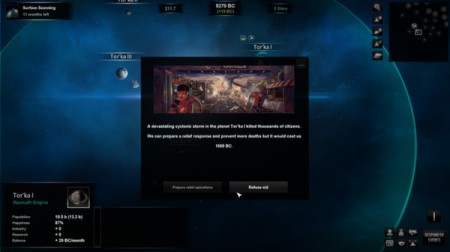 The starting army unit, doesn’t have any weapons. Something I didn’t realize until it was too late and I was being attacked. Since you can customize and create your own designs, the game only starts you off with 3 ship designs. A colony ship, an army ship (which has ground invasion capabilities), and a scout. So if you dream of military conquest, or even interplanetary defence on your first turn, create a ship that can actually attack other spaceships. The positive side of all this is that you do have the ability to design your own ships.

Slots available are engines, defenses (armour and shields), weapons, and other modules. However, they have a mass limit, which in my experience is too low and doesn’t even allow you to fill all the possible slots, or even close. The Capital ship (the largest possible ship type) only has a mass limit of 40 tons! You’re telling me a massive capital ship weighs about half as much as the average blue whale? Other modules are things like repair modules, army transport, and colonization. Army transportation is important for ground invasions, if you plan on gaining other races’ planets through military conquest. There are also 3 weapons types: beam, plasma, and missiles.

The game does have a Casus Belli system, but it is lacking in execution. If your Latin is a bit rusty, Casus Belli literally means “case for war”and I was hoping for something along the lines of Crusader Kings II, where there has to be a reason for war. Instead, it is more like Civilization, where you can declare war or have ware declared on you for any reason – or no reason at all! To me, this was certainly a wasted opportunity.

As I mentioned, the universes are randomly generated each time you start a new game in Lords of the Black Sun and have a variety of user options including the presence/absence of pirate clans & minor races, planet quantity, planet conditions (how livable they are – certain technologies can change if your people can live there or not), amount of space debris, the overall size, and many others. Each planet has factors that determine whether it’s a priority for you to try to colonize or not. These include how rich with resources it is and its climate, as well as more strategic aspects like whether you’d need to defend it from nearby races. Each planet also randomly generates traits like hidden metal reserves, natural fauna, deadly wind speeds or terrain, etc.; all of which give buffs or debuffs to different stats.

There are also a lot of randomly generated events throughout the game. Normally, they are natural disasters, where your people need money to get things back in order. Sometimes, there will be other races who are causing trouble on a planet and you have to decide whether to imprison them and upset their race (affects diplomacy) or let them go, and upset your own people. I also played one where there was a cosmic anomaly and all ships could only fly at 50% speed.

The main menu is simplistic and minimalistic, but it’s completely perfect for a strategy game. While having to choose which races you want to play as/against and their difficulty settings can be a bit tedious, it really gives you a lot of customization. It’s really a matter of perspective as to whether this is a positive or a negative aspect. One thing that’s a huge positive for me, is the fact that there are shortcut keys for all the UI in the game. Especially for a strategy games, I like to use the mouse as little as possible. 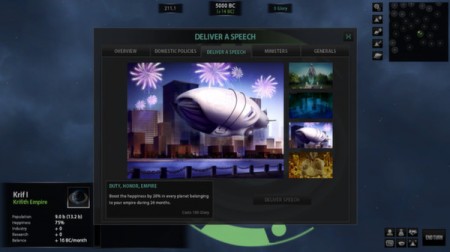 Now, if you want to get really nitpicky about the game, I found having to completely restart for every graphics setting/option change, to be a bit much. Plus, the game does have a fairly long loading screen, which sometimes makes you wonder if it has crashed or not. I also had issues with even launching the game at first, but I figured out why. It’s sort of a unique situation, mind you. I have 2 monitors for my PC, each on a different resolution (one is a few years older and not widescreen), so the game didn’t know what resolution to set as the default, and would just freeze as a result.

From what I’ve read on the site, there is modding support, but after some searching I don’t see a Steam Workshop or anywhere online that actually hosts mods. So I am assuming that this is something in the works and not yet released. Another thing, while on the topic of ‘community’, is the lack thereof in the community hub on Steam. From my experience, developers are normally quick to answer threads with game-related questions or issues, but Arkavi is silent for the most part, aside from posting threads informing players about game updates.

Combat is the final thing to touch on. It is also turn based, with a hexagonal tile playing field. Each ship has a certain amount of movement measure in AU (astronomical units). Depending on what range you’re firing from, it has a hit percentage. Side shots have the possibility to shut down weapons, and rear shots have the possibility to shut down the engines, each for a set number of turns. The combat is simplistic yet fun, although sometimes I wished it was real time rather than turn based.

To conclude, everything considered, this is a fun strategy game. For me, it is more on the simplistic side of things, but its appeal will vary, based purely on what type of strategy game you enjoy.

It is a fairly standard 4x strategy, but things like custom ship design, potential for mod support, and the multitude of universe/race options on game startup, give it some uniqueness. This is definitely a game I will continue to play, and keep an eye on, with hopes of further expansion and improvement in the future.

Unto The End (PC) Review