Ever wonder what the deal is with James Bond’s M? He’s something of a mystery, no? Well Dynamite Comics is about to reveal the top MI-6 agent’s past.

When you’re talking about James Bond, there isn’t a lot that hasn’t been previously explored. There’s the current series of films with Daniel Craig, which you probably know all about. Then there’s the lengthy catalog of movies that came before this “new” soft-reboot. There’ve also been a whole mess of novels (the original Bond stories) and comics, as well as a few video games. So, there’s not a ton that seems new about him and his world.

But there are a few things. And you can pretty safely mark M down on that list. The head of Britain’s spy agency MI-6, M is the one that doles out the Licenses to Kill. He’s currently played by Ralph Fiennes, who took over for Dame Judy Dench. But even though the current version of the character has been around for a few films now, little to nothing is known about him. 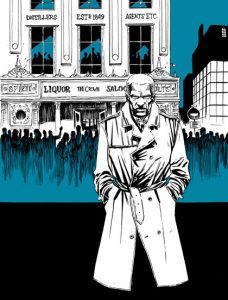 That’s where this comic comes in. A one-shot from publisher Dynamite Comics, James Bond: M will tell a whole new tale.

James Bond’s superior, code-named M, scrambles MI6’s secret agents across the globe. Sometimes, he knowingly sends them to their deaths, for the greater good. But a traumatic event from M’s early days in the field returns to haunt him, forcing M to return to Belfast, the scene of a crime…HIS crime.

Writer Declan Shalvey says, “I’m delighted to play around in the Bond playpen for this one-shot. Myself and PJ Holden have talked a lot about what we’d like to see in this story, we want to take a British spy and put him in a world that is both foreign and familiar. Belfast is such a unique place and a really great opportunity to do something different with a Bond character yet will still feel very much of that world. PJ is such a fantastic storyteller, I’m excited to see what he does with this story, being from Belfast himself. I love one-shots, and I know that PJ, along with Dearbhla Kelly are going to make this a beautiful package.”

Aside from Shalvey, James Bond: M will also tout some terrific art from the aforementioned Holden. But his story with the real-world Belfast aside, he’s a pretty killer artist too. If you’re not aware, he put time in on both 2000AD and Judge Dredd.

Related Article:  DC Comics outlines books for the rest of the month

Here’s what he had to say about his latest collaboration:

Artist PJ Holden says, “Look I’ve walked the streets of Belfast checking dead letter drops and wanting to be a super spy since I was 7 years old, I’m pumped and primed for this. Bringing Bond’s boss M to Belfast is the job I was born for.”

“It is always such an honor to work with a master like Declan Shalvey, and we’re excited to see his unique take on the Bond Universe and working together again with PJ (Holden),” says Nick Barrucci, CEO and Publisher for Dynamite. “We’re certain that with his unbelievable ability to craft an intricate story, combined with the stunning artwork of PJ Holden, M’s long overdue profile will be as superior as the character himself!”

Sound good? Then hang on, James Bond: M is set to arrive on racks this coming February.

UK Retailers Offering Forza 5 With Xbox One Day One Edition