Fans of the zany crossover Mario + Rabbids: Kingdom Battle should not miss this absolutely bananas add-on.

I’ve just wrapped up the main story of the new Mario + Rabbids: Kingdom Battle Donkey Kong Adventure DLC, and I have got to say: it is excellent.  Rather than be more of the same, the pack introduces two brand new characters with new primary and sub-weapons and completely unique mechanics.

Donkey Kong can pick up and reposition enemies, allies, and cover, and swing along vines to cross the entire map in a single turn. His boomerang can bounce to up to five enemies in a single attack, as can his “hairy shot,” which is like Mario’s “Hero Shot,” except with the added bonus of also bouncing from foe to foe. His ground pound attack hits enemies (and allies) in a wide radius around him. He feels exceptionally powerful to play from beginning to end of the campaign (which will probably take you half a dozen hours to complete). 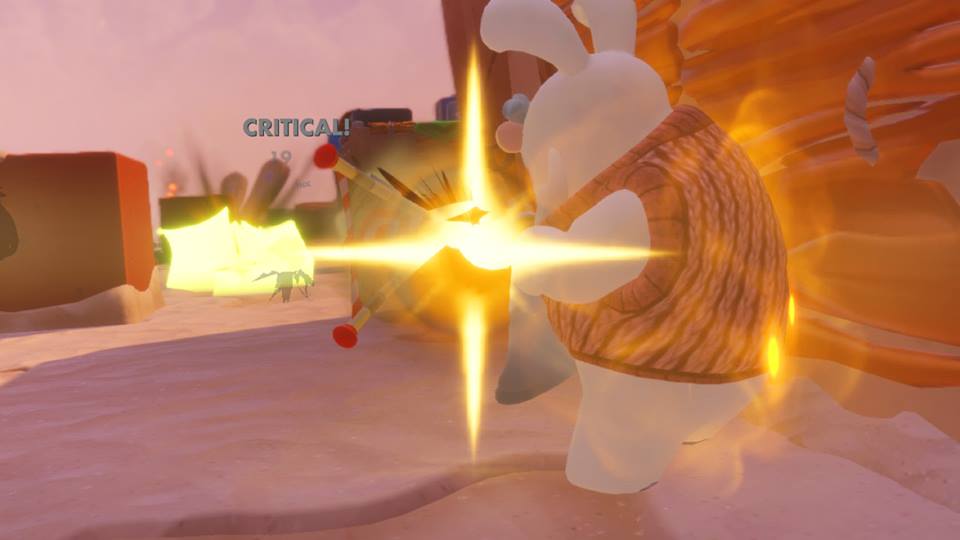 His partner in crime, Rabbid Cranky Kong, fires his shotgun-crossbow whenever he’s in the air. If DK throws him, he’ll fire down on his opponents, and if he does a team jump, he’ll fire again. The resulting 120 easy AOE damage per turn (with an automatic freezing effect, shutting down enemy abilities) completely changed the way I approached both cover and my team’s formation.  His bowgun and bomb both have significant range, too, making him a deadly partner to the king of apes.

Joining them is Rabbid Peach, the selfie-obsessed diva star from the base game. Her healing ability is the peel that holds this banana together, as DK and Rabbid Cranky Kong live on the edge- usually outside of cover and right in the enemy’s face. 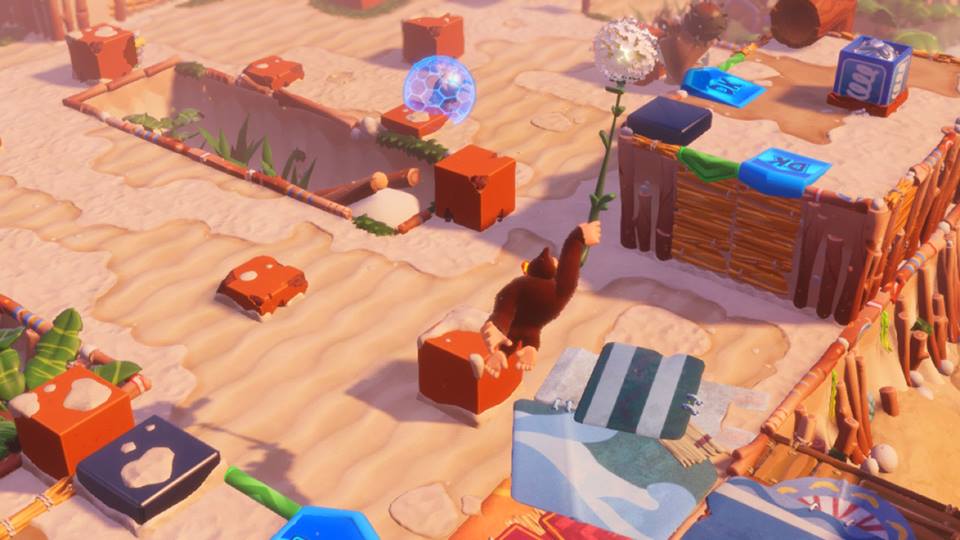 The fundamentals are the same as the base game. Team Jump, abilities on cool downs, primary and secondary weapons, block puzzles, enemy types- you’re seen it all before. But the unique abilities of the new characters and the adapted level design change everything.

Between battles, you’ll still solve block puzzles that push the limits of what block puzzles can be. The rewards haven’t changed. You’ll get artwork, soundtracks, and character models to view back on the atoll. You’ll also spend your runes to level up your characters (you’re still able to re-spec at all times. Rabbid Peach does start from zero again) and spend your hard earned bananas on new weapons.

All the humor and beauty of the original is on full display here, too. A watchful eye is rewarded by busy backgrounds, complete with the wacky rabbids getting up to their usual antics. The rabbids (including new Cranky Kong) are the stars of the story. Rabbid Cranky’s old age pairs well with Rabbid Peach’s cellular obsessions. 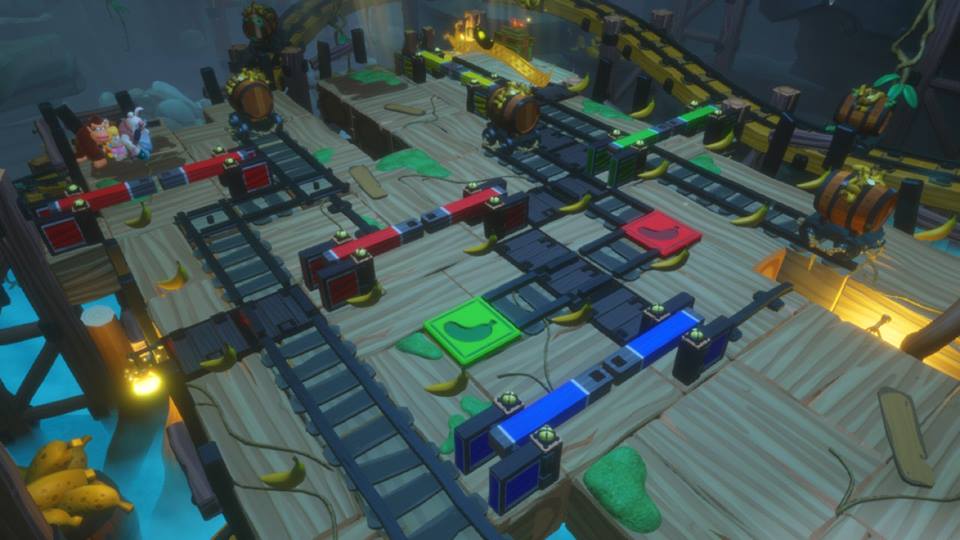 The flavor of Donkey Kong’s world comes through in small ways. Bananas replace coins, and, like in Donkey Kong Country, collecting lines of bananas will spawn a bunch. Instead of the cosmic blue puzzle rooms from the base game, you’ll tackle puzzling mine-cart stages. Puzzle pieces are scattered around the world for you to find as well. Grant Kirkhope also makes sure we feel like we’re back on DK island, romping through the tropics. I quite enjoy the new battle themes in particular.

Those battles have some new victory conditions too. Some stages will ask you to destroy piles of bananas; some will task you with stopping escaping rabbids from reaching the end of the stage; others still will send you chasing after rabbid collectors and their washing machine parts. 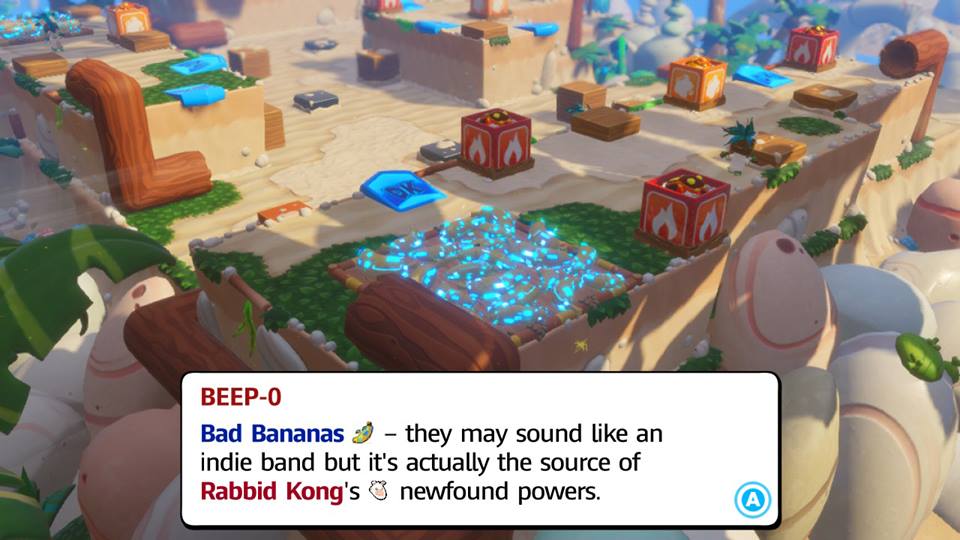 Supremely mobile enemies seems to be a running motif in the DK expansion, as some foes, especially bosses, have movement ranges over 30 spaces, and several of them run the length of it every time they’re attacked. It can sometimes be a pain to chase them down, but DK always has the tools for it.

After completing the main story, you can go back and make sure you’ve got every gold trophy (I missed out on three during my run; those par times can be over the top!), continue your search for the collectible items, and fight new challenge stages. It should be mentioned that they are indeed quite challenging- I tried one and it turned sour after a single miscalculation.

You still can’t skip stage flyovers if you have to restart a level, eating up chunks of time when you’re ready to get back into the thick of it. The new characters also are unavailable in the versus and co-op modes, unfortunately, meaning there is no way for DK and Rabbid Cranky Kong to join up with the rest of the cast for some real antics. But the gripes with the expansion are minor. Mario + Rabbids: Kingdom Battle Donkey Kong Adventure is a sublime expansion to a great game.

The add-on content is available even if you haven’t beaten the main story. It can be purchased as for $14.99, or bundled in the $19.99 season pass, which includes some ultimate challenge stages and a pixel pack of weapons ($6.99 and $2.99, respectively).