With a trio of teams running around in the current Marvel U, I think it’s probably safe to say that -yes- the X-Men are back in a big way.

Is this too much X-Men? That’s a strange thing to write since it wasn’t all that long ago that I was pining for the glory days of Marvel’s mutants. Now here we are with a boatload of monthly X-books once again, and I’m left wondering if Marvel maybe went too big.

As big of an X-fan as I am, and believe me I am, I don’t even read everything that’s currently out there. I get in Cable, and the Blue and Gold, but that’s about it. As oversaturated as the mutant market might be at the moment though, I think X-Men Red is instantly going to be added to my pull list.

“As an X-Men fan, as a Jean Grey fan, as a Mahmud Asrar fan, and as a Travis Charest fan, to be asked to write X-MEN RED is a dream,” said series writer Tom Taylor. “The time is right for an X-Men book like this, and I’m very excited about the story we’re telling in these pages. I’m excited for Jean Grey’s vision for the world, and I can’t wait for Marvel readers to meet our team of established fan-favorites and brand new mutants, and to see them in action. To write a core X-Men book is to walk in the footsteps of giants, so I’m hoping my secret mutant ability is sudden foot-growth.” 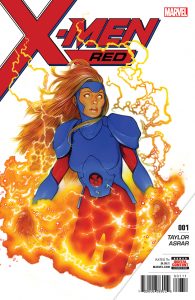 “Jean Grey has been one of my favorite characters ever since the Dark Phoenix Saga, so I’m pretty excited to be a part of her return,” added series artist Mahmud Asrar. “The stories we plan to tell really captures the essence of the X-Men I read lovingly growing up. It’s just a delight to be working with this team. I have been working on many components of this book, including the designs of the characters old and new, and I haven’t been this eager to see the response to this book in a long while.”

A new team, and a new pretty much everything else too

While we don’t really know much about it, we do know that this new book will center on a Jean Grey (the original one) led team. That’s almost enough to get me into it right there. Then there’s that cover though, that shows Phoenix in a uniform that clearly harkens back to her 90s Jim Lee togs. Hard to resist for a fan like me.

Marvel is promising new uniforms for everybody on the roster (I’m betting on the recently reawakened Wolverine to be there), as well as “a new team headquarters, and exciting new characters”.

Oh, and one more thing, figure on this being a landmark X-Men comic. It’s another “main” X-title, so that alone is big, but Marvel is hinting at more. According to the publisher, this is “the series X-fans have been waiting for”.

“Tom has captured the spirit of a quintessential X-Men book,” said series editor Mark Paniccia. “It’s got dynamic hero moments, great character interactions, and a surprise villain at the end. Mahmud is doing some of the best work of his career, going into this fully charged and designing cool new costumes for our eclectic team. I’m thrilled to have Travis on covers for this series. I’ve always thought of him as one of the industry’s best artists. It’s a real honor to have him as part of the X-MEN RED crew.”

I’ll also be shocked if there aren’t a bevy of variants in store, so maybe watch for that too. X-Men Red #1 hits stands in February.

Related Article:  Bring a little dark side to your favorite drink with DST's newest bottle openers

Inferno! Again! But also not.