The first issue of Infinity is on sale now, along with a special Infinite Comics tie-in – Infinity: Against The Tide Infinite Comic #1 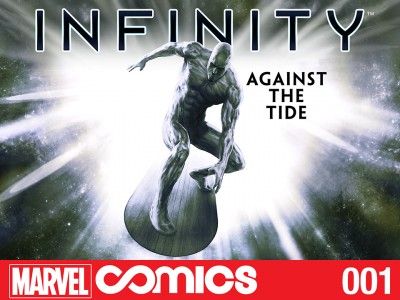 While the entire Marvel Universe clashes with the World Builders on one front and Thanos on the other, the Silver Surfer takes the fight right to humanity’s foes. The Sentinel of the Spaceways takes it upon himself to get between a Builder armada and their target, the Earth.

Infinity: Against The Tide is the first Infinite Comics crossover with Infinity and is part one of two for the book. Written and storyboarded by Jason Latour, a man who knows what he’s doing with the digital Infinite Comics brand thanks to his currently running Wolverine: Japan’s Most Wanted story.

Infinity: Against the Tide #1 is totally free of charge and available through the Marvel Comics App. Also, don’t forget that the physical Infinity comic comes complete with Marvel’s now standard AR codes for a little augmented reality action, as well as a code for a digital copy of the book for free.

Related Article:  Star Wars #1 sells out in just a day

Want more Infinity? Check out  www.marvel.com/infinity, or chat things up on Twitter with #MarvelINFINITY.

Here’s what Marvel Comics will have in stores this August