Cap’s been left an old man by the loss of his super soldier serum and now must pick a replacement to be the next star-spangled man. 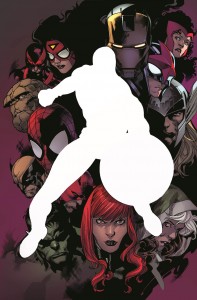 This October, bear witness to the next exciting phase of the Marvel Universe, as the torch is passed and a new hero will rise. Today, Marvel is proud to officially unveil the cover to CAPTAIN AMERICA #25 – the extra sized issue from chart-topping writer Rick Remender and the epic finale to The Tomorrow Soldier arc. Remender and artist Carlos Pacheco will have fans on the edge of their seat and have the whole comic industry asking – ‘Who is the All-New Captain America’?

Steve Rogers is a frail, broken man. Drained of the Super Soldier serum by a fearsome new enemy, he can no longer wield the shield as Captain America. The mind willing, but the body unable – the Sentinel of Liberty must choose his successor. But who will carry the mantle?

“The choice he has before him as to who he’s going to select as his replacement seems very simple at this point – it’s a short list – but we’re revealing a number of characters in #23 who’ve been gone for a while, that decision gets a little trickier,” says Remender in an interview with Marvel.com.

Elaborating on the new Captain America, Remender said “It offers up a lot of new drama as well as getting to tell Captain America stories with an entirely different character, a character I have a real affinity for and like to write. I think fans will dig what we’ve got coming up.”

The Red Skull and Zola have joined forces and the invasion by Dimension Z has begun. In the shadow of the coming storm, a new Captain America will rise – but who will pick up the shield and fill the void Steve Rogers left behind? Find out when history is made this October in the super-soldier-sized CAPTAIN AMERICA #25!

This might just be the worst kept secret in comics these days, but I won’t spoil the surprise for you here just in case you already don’t know…. nope, not gonna do it. Needless to say, Cap’s are big shoes to fill as one of the tops heroes in the Marvel U. It’s not like something like this hasn’t been down before though, and that’s something that kind of has me aggravated as a Cap fan myself.

We basically just went through the ‘death’ of Captain America a few years back with Civil War and now he’s gone again? I know the chances of this actually sticking are about a million to one (remember, the second Avengers movie comes out next year), but come on already; Cap not being ‘Cap’ is getting to be about as common as Duke falling into a coma on the old G.I. Joe cartoon show. But I’m getting ahead of myself… and the storyline.

The new Captain America is set to debut this October, which puts him right in the line of fire for the Axis event that Marvel is cooking up. Odds that by the time Axis ends Steve Rogers is Captain America again? Bet on it in my book. Then again though, Spider-Man had his mind swapped with Doc Ock for way longer than I figured he would, so who knows I guess.

Captain America #25 lands on the racks this coming October from Rick Remender and artist Carlos Pacheco.

Related Article:  Marvel goes big with Venom in The Edge of the Venomverse