A blast from the past, Marvel Comics revisits their first go at the Star Wars universe, from way back when the franchise was new. 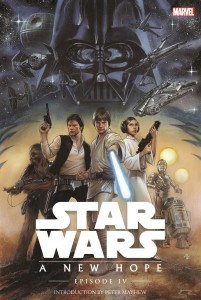 Weeks before George Lucas’ first STAR WARS film hit theaters – Marvel gave eager fans their very first look at Luke Skywalker, boldly asking “Will he save the galaxy, or destroy it?” Now, 30 years later, you may know the answer, but that doesn’t spoil the excitement of reliving this now classic adaptation like you’ve never seen before – including scenes that never made it to the silver screen!

Billed as an original graphic novel, this new book from Marvel is actually more like an ‘HD edition’ of something that’s come before. And by that I mean that the story here is not only the original tale of A New Hope, but it’s also the exact tale that Marvel published way back in 1977, complete with the scenes that didn’t make the cut for the silver screen version.

So with that in mind, what makes it HD? Well, the all-new coloring doesn’t hurt any. Remastered by colorist Chris Sotomayor, Roy Thomas and Howard Chaykin’s retelling of the classic Star Wars story has never looked better. And framed by an Adi Granov hardcover, this is set to be one book that fans will probably not want to miss out on.

The first of three books (including the ‘on the way’ Empire Strikes Back’ and Return of the Jedi’), the Star Wars: Episode IV A New Hope OGN will be in book stores and comic book shops next month.

One Piece Odyssey is an RPG with a story by the creator, coming in 2022

The force goes on sale with the Star Wars Humble Bundle