What is Infinity? Whatever it is, Marvel seems to be aiming to make a splash with it and a few of its heavy-hitters in early 2018.To Infinity!

There’s something brewing in the Marvel Universe, and it involves the Infinity gems! I mean stones. Yep, definitely stones, and not gems. Gems are so ’90s after all. Then again, so is Wolverine, and he’s here and ready to take part in whatever this turns out to be.

You might remember it was not all that long ago that the original Wolverine, Logan returned from the “dead”. In his hand was a very familiar stone, part of a group of artifacts of immense power that’ve plagued the Marvel U since the 1990s (when they were called gems).

Here we see Logan right on the teaser poster for something simply called “Infinity”. No Gauntlet, no War, no Crusade- just Infinity. He’s joined by Star-Lord and Captain Marvel, both also wielding stones. Framing the image is wording that talks about a “countdown” kicking off in February of 2018. So we know that whatever Marvel’s latest event book is, it starts in the second month of the year. Or at least, the countdown to it starts then.

One thing that it probably won’t be though, is a Thanos story. Though the big bad might be in it somewhere (I would bet on that), he’s been used a ton in the last few years in Marvel’s comics. It’s because of that, that even though the next Avengers movie will star the villain on the big screen next year, I wouldn’t bet on a meaningful appearance in the comics.

Then again, I could be wrong. This could easily be a set of Marvel heroes wielding Infinity stones against Thanos, who’s looking to re-aquire them. Unfortunately, the poster kind of hints at something like that. We’ll see.

For now, all we get is this: 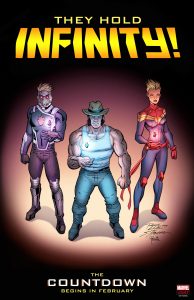 Who will hold Infinity?

The countdown begins this February!