This is a strange one, Marvel Comics is listing the return of a few big name crossovers for this coming Summer… something’s afoot. 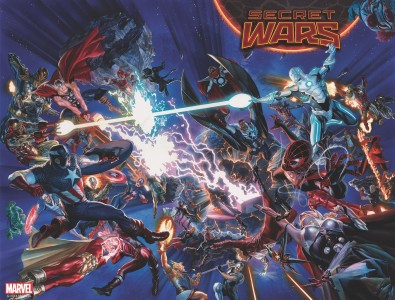 Civil War? Age of Ultron vs Marvel Zombies? Years of Future Past? Something big is happening in the Marvel Universe next Summer and the publisher is teasing fans in some very interesting ways.

The first thing that springs to mind (well, my mind anyway) is that the events of all the time-stretching and reality-warping that’s been going on in the Marvel U over the last few years is finally coming due. That’s a theory that I’m pretty comfortable with too since there’s an Avengers event coming up very soon that will show a fractured version of the future, 8 months down the line in Marvel’s continuity.

What might be the fallout from all this re-visitation and hopping around from year to year? Well, that’s something that we just don’t know yet, but as a big Marvel fan myself, I’m hoping for a reboot of sorts.

I know what you’re thinking, boo to reboots, but I really think Marvel needs on in the worst way. I believe that all comic book universes need something like this from time to time to keep everything straight and approachable for fans both old and new. And there are so many classic Marvel characters that I’d love to see back in action and returned to form, that I’d be very excited indeed if a reboot of some kind is in the works. It’d also give Marvel an easy way to bring back charters like Wolverine, Captain America (Steve Rogers) and the male version of Thor, which is all bound to happen at some point anyway.

With all these big names being tossed around (the crossovers I mean), this is going to be big. Just how big remains to be seen. Look for the Marvel Universe to rock this coming Summer.

The Punisher returns to the Marvel U in 2016