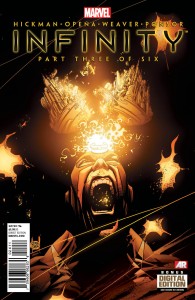 The Inhumans have always been such second tier characters in the Marvel U. It’s great to see them in a more starring role in Infinity- especially since they’ll be going up against a menace the stature of Thanos.

Thanos will, of course, be quite the force in all things Marvel over the next few years as the publisher ramps up ‘phase 2’ of its Cinematic Universe – with The Mad Titan as a central villain. Infinity is a great way to reintroduce him to comic fans too.

The massive crossover event sees Thanos return in a big way when the Avengers are called away form the Earth for a mission of the cosmic scale. The villain then makes his move and it’s up to a rag tag group of heroes to ‘assemble’ and fight him off. Right at the fore of that effort will be Black Bolt and the Inhumans. If you’re not familiar, Black Bolt is the king of the Luna-living supergroup and can literally annihilate everything in his path with just a whisper. Now that’s some vocal projection right there.

See Black Bolt and his team in action, when Infinity #1 launches this August. In the meantime, check out the cover to the third issue of the 6 part miniseries above, with art by the great Adam Kubert.

Related Article:  The Force Awakens' Poe gets his own comic from Marvel