All those teaser images released over the last few months are coming to a head in 2015’s all-new Secret Wars #1, and Alex Ross is providing the cover art. 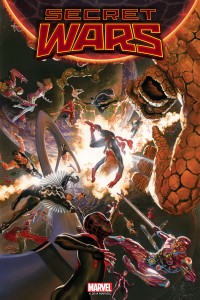 Now, get a closer look at Alex Ross’ stunning cover to the explosive first issue. Gorgeously rendered by one of the most iconic figures in the industry, this spectacular cover is just the tip of the iceberg – offering fans their first exciting look behind the curtain into the world of Secret Wars!

The road to the biggest comic event of 2015 is happening right now in the pages of Avengers and New Avengers, so jump on board before TIME RUNS OUT! Be there when the Secret Wars commence this May in SECRET WARS #1!

One of my flat-out favorite artists, cover or otherwise, Alex Ross has become a staple of some of the industry’s biggest books. His artwork from Kingdom Come for DC and Marvels for Marvel Comics still ranks up there as some of the most stand-out of all time in my mind. It’s tough to think of an event book and not think of Ross handling the cover, and apparently Marvel feels the same.

This is a very big book for Marvel in 2015 too, as it’ll be the culmination of a whole mess of story lines about the time and space issues that the Marvel Universe has been having over the last few years. It’s also set to merge a bunch of the more popular alternate realities and timelines that the Marvel U has seen come and go over decades past. Needless to say at this point, it’s going to be big. And there’s no better artist to provide the cover art than one of the giants of the art form, Alex Ross.

Catch the first issue, as the Marvel Universe comes crashing down, this coming May.

The Punisher returns to the Marvel U in 2016

New HULK comic on the way from Marvel this Spring