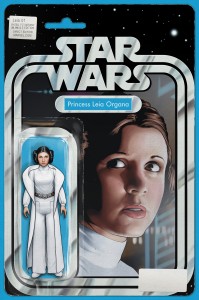 When Princess Leia Organa was captured by the Empire as a Rebel spy, she never betrayed her convictions, even in the face of the complete obliteration of her home world, Alderaan. When rescue came, she grabbed a blaster and joined the fight, escaping back to the Rebel Alliance. But in the aftermath of the Rebellion’s harrowing victory and destruction of the first Death Star, the question remains – what is a princess without a world?

When you think about it, because I think it’s actually almost completely glossed over in the movies, Leia has been through a heck of a lot as Episode IV comes to a close. That’s exactly where the new comic from Marvel begins.

Leia’s ‘homeworld’ of Alderaan has been eradicated by the Death Star, she’s openly begun working with the Rebel Alliance, and she’s being hunted by the Empire. That’s probably not a place too many royals would feel overly comfortable. Then again though, Leia isn’t your average royal.

Still though, what does a princess without a kingdom do exactly? Writer Mark Waid explains and teases what’s to come in the new limited series:

“How does she really cope with losing her entire world once the events around that loss have calmed down somewhat? Does she choose to be a princess of nothing – or does she set out to rebuild her heritage and civilization?” asks writer Mark Waid, in an interview with Marvel.com.

Marvel promise that Princess Leia will explore what happens after the great battle at the end of Episode IV, and the events that lead Leia to becoming one of the pillars of the Alliance and a leader of the future of the Star Wars Universe. The first issue hits the stands from Waid and artist Terry Dodson on March 4th.

Marvel’s Mutants head for the stars in SWORD