Secret Empire is one of a bunch of big Marvel events that look like they’ll be making waves this year. Now we’ve got a look at the villainous opposition, and there are a few surprises.

The most Secret of Empires

In a nutshell, Secret Empire is a Marvel event book/crossover that’ll see the heroic forces of the MU taking on Hydra for control of the globe. Right in the middle of that will be -of course’ Captain America. He’s a secret Hydra agent now remember, fooled by the Cosmic Cube into thinking that he’s one of the bad guys.

Whether or not he’ll finally realize he’s a puppet on a string or not in this one, we don’t know. What we do know now though, is that he won’t be the only baddie. Marvel Comics has taken the wraps off of a whole cadre of villains that’ll be doing Hydra’s bidding in Secret Empire, and some of them are a bit perplexing… to say the least.

Well, one of them is.

I’m more than a little happy to see Magneto getting not only a top billing here, but also back to being a straight villain again. I’m not a fan of seeing Erick as a hero, and getting him back to arch-villain status is a very good thing. But, is he being controlled by the Cube as well? Cause really, it makes zero sense why he’d be helping Hydra do anything.

First, he’s a former concentration camp inmate and Hydra is, at its core, a Nazi organization. Magneto has plenty of hatred for all of the above. Second, he’s a mutant, and a genocidal one at that. Why he’d be helping a human-led organization is almost as odd as the aforementioned.

Magneto aside though, this list is a who’s who of Marvel’s Hydra worst. And I mean that in the best way possible, cause all of these guys and gals are classic baddies. Most have long-standing associations with Hydra too. 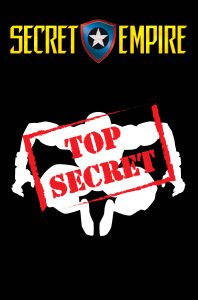 Now, you’l notice a question mark in there. It’s a secret villain that Marvel isn’t ready to unveil just yet. As you can see in the preview image to the right though, it’s kind of a unique silhouette. And I have three trains of though on that.

This part’s all personal opinion

Number one – even though it looks like him, it’s not Spidey. Number two – it could easily be Cap himself, finally revealed, or some formerly unknown Hydra operative. Here’s the thing with that though: it’d be plenty anticlimactic. We already know Cap is a villain (sort of), so I don’t think Marvel would go that route. As to the thought that it could be someone ‘new’ to the story arc, well it could be. Marvel has shown that they love a good shock, especially a controversial one. Could always just be the Skull too.

And sort of in line with that, I’m thinking it might be Miles Morales. Miles had a vision of himself, where he killed Cap. It shook him up and he certainly didn’t relish the idea, especially since no one really knew Cap was a secret bad guy at that point.

But, and this is all conjecture, could Cap shake off his Hydra reprogramming early on in Secret Empire? Could Miles’ own mind be compromised in the events that lead up to that, or just after it? As we’ve seen with the new Cosmic Cube, it could easily happen.

Miles has become a beloved character in a pretty short period of time though. So if that’s the case, then it’d be a a monster of a shocker if he became a pawn of Hydra. Double that too, if he actually does kill off Captain America.

Already set up to be the major crossover this year, Secret Empire just might be way bigger than fans have already thought. Stay tuned, the above issues all start landing at stores this May.

The Delicious Last Course — How to unlock the secret boss, plus tips on winning

Devour update brings batteries to power up your UV flashlight