Next month is a pretty big one for Star Wars fans, not only are the new action figures hitting the market, but Marvel’s Star Wars goes into the middle ground between the original trilogy and the new one with Journey to Star Wars: The Force Awakens. 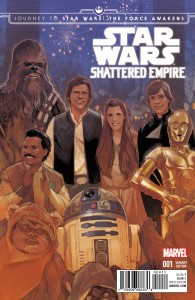 This whole Fall is going to be rich in Star Warsy goodness, loaded with stuff to celebrate the first film in the new trilogy that hits in December. And Marvel’s relatively new lineup of Star Wars comics will very much be a part of that with the first ever comic book set in the new continuity.

Charge headlong into a new era of Star Wars comics as the first Marvel series to take place after Return of the Jedi kicks off this September! Today, Marvel is proud to present your first look at JOURNEY TO STAR WARS: THE FORCE AWAKENS – SHATTERED EMPIRE #1 – a brand-new series from the critically acclaimed creative team of Greg Rucka and Marco Checchetto. High above the forest moon of Endor, the Rebel Alliance makes their desperate last stand against the might of the Empire. Though they are successful in the destruction of the second Death Star, the Empire is far from beaten. Now, follow Shara Bey, an A-Wing pilot in the Rebel Fleet in the days following the Battle of Endor. Though their super weapon has been destroyed, Shara will discover that just how dangerous and unpredictable a shattered Empire can be! Don’t miss the explosive first issue as Marvel takes a deeper look into a part of the Star Wars universe yet unexplored in JOURNEY TO STAR WARS: THE FORCE AWAKENS – SHATTERED EMPIRE #1 comes to comic shops on September 2nd!

So playing right into The Force Awakens, the book seems like it’ll have just what you’re looking for if you want a little refresher on what’s canon now, as well as a sneak peek at what’s to come. As far as the story goes, it makes a lot of sense that the Empire wouldn’t just crumble away with the death of its leaders and destruction of most visible symbol (again).

Still though, it should be considerably weakened, and ripe for a more frontal and sustained assault by the Alliance, which seems like what’s happening by the time Force Awakens rolls around. This one should be a fun read to fill in the blanks, and a smart addition to the Marvel Star Wars stable, which is sure to expand in the wake of the new films.