The Blue Bomber is back. Kind of. In color of the first time, Mega Man’s original comic tales are retold here in Udon’s latest title.

“The Birth of Mega Man! In a world where humans and robots live and work together, six powerful robots have suddenly turned against their programming and set their sights on causing chaos and destruction! Only one heroic robot stands in their path – Mega Man, the greatest creation of Dr. Light!” 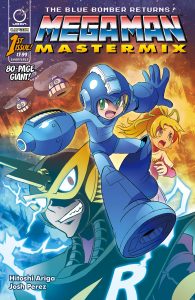 Mega Man has been the subject of many a fan’s pining for the last few years. It’s been some time since we got a new Mega Man game after all, and fans are sorta, kinda running out of patience. Sure we got another “collection” of old Mega Man titles, but that’s not really appeasing anybody. Though that’s in the video game arena, and we’re talking comics here.

The correlation between the two forms of media is pretty obvious here however. That’s because Udon’s new book is reprinting the classic stories from Hitoshi Ariga’s first iconic run with the classic Capcom character. They’re not entirely reprints though, thanks to the new color work the Udon has seen to.

While the original books were in black and white, this new series has colorist Josh Perez working on it. So you can expect every bit of the vivid colors that you’re used to seeing popping off of every page.

Celebrating 30 years of Mega Man, you can expect to see issue #1 of Mega Man Mastermix on store shelves this coming January. As for a new Mega Man game… maybe don’t hold your breath.

Capcom leak has “potentially” led to data breach of 350,000 people