Lion’s Forge forges ahead with an all-new take on the classic TV show Miami Vice. Remix takes the familiar format into the modern age with the undercover cop duo, drug lords, and… zombies? 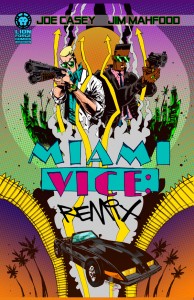 So first off, I love Miami Vice. The show was a mainstay in my house growing up and I still dig it big time today. Sure it’s goofy and a little silly, but it’s just so much fun and so monumentally 80s that I just can’t not like it. I actually even have the Crockett and Tubbs action figures that Mezco came out with a few years back.

With Miami Vice Remix though, it both is and isn’t what you might remember from the show.

Sure the setting is more or less the same, but the time period isn’t the 1980s (it’s modern), and the characters all look just a little bit different for that. If you’re a huge fan, there’s a chance that you might be a little put off by these alterations, but I personally really like the updating and feel like it’s a property that kind of needs it.

Related Article:  Deadpool returns to Steam on the PC

Maybe if the aesthetic was radically different, I wouldn’t like it so much, but the feel is still there and the tone is most definitely intact (with the addition of copious cussin’). It’s a very solid updating is what I’m saying here, and it leaves the best themes from the TV series intact.

The story starts off with Sonny Crockett and Ricardo Tubbs, undercover cops in the Miami drug scene, making a spectacle of themselves as they’re being chased by Miami’s finest. This is all part of their deep-cover by the way, as they have to make it look like they’re decidedly with the bad guys. From there, we meet Castillo (their hot-headed lieutenant at the department), a drug-lord who claims to be in touch with voodoo spirits, Sonny’s alligator Elvis (don’t ask), and some zombies.

Yes, zombies. Seems that there’s a new drug on the streets, one that turns its users into ‘zombies’ for lack of a better term, and one that’s based in reality in a way- they call it Miami Bath-Salts. These aren’t your standard flesh-eaters that result from abuse of the drug either, as these undead aren’t really dead at all, and can use guns and follow orders. That makes them more along the lines of the ‘real’ voodoo zombies of legend, and actually pretty different from what you’re likely used to seeing.

Related Article:  Season of the Splicer -- Review in progress

Overall I really liked the script from writer Joe Casey, and how he introduced all the major players in this first issue. Other than what I already mentioned about keeping the theme and feel of the show, Casey also has the personalities pretty much down pat. Tubbs is written like Tubbs, and I easily was able to read Crockett’s lines with Don Johnson’s voice echoing in my head.

Unlike the story though, the art style was a little off-putting for me originally. I’m usually more a fan of somewhat realistic or superhero-y styles that are found in most comics, though I actually warmed up to the super-exaggerated style from the pencil of artist Andy Mahfood just fine. It looks extremely cartoony and actually does fit the property quite nicely. It also fits the ’80s’ vibe, which I liked too.

As a fan of the original show, Miami Vice Remix gets my approval.

It might not be set in the original series’ timeline, but it carries forth all the main ideas, characters, themes, and flavor of that classic 80s show. It’s also nowhere near the awful revamp that Hollywood turned out, which is a good thing indeed. That film also updated the show to the modern age, but with not half the style and flair that this comic does. And really, style and flair are kind of pretty big elements to Miami Vice.

I really enjoyed the first issue of Miami Vice Remix, and I’m definitely going to add this one to the monthly read pile.

Season of the Chosen review in progress