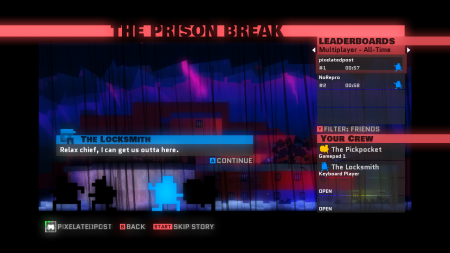 I had heard a lot of things about Monaco before I started playing it; it’s complex, there’s a heavy planning stage to each mission, it’s a party game and so on and so forth… Bottom line? I’m very happy to report that all of the above is either completely false or true but with a twist.

Monaco is a game about being a ‘dirty criminal’, but there’s a ton more to it than that and the game has a huge appeal. I don’t think there are too many people out there who don’t enjoy a good caper flick after all. Even the more recent entries in the little seen film genre are tons of fun, like the aforementioned Ocean’s 11.

As far as games that carry the heist theme, I honestly can’t think of two. Outside of Monaco, what else is there that allows you to infiltrate highly secured locations, make off with loot, and isn’t primarily an action game? Right. But it’s not all thieving in Monaco either, because Pocketwatch’s creation actually has a really neat story about a gang of criminals that break out of a European prison and the adventures that they go on and schemes they scheme once they’re out. 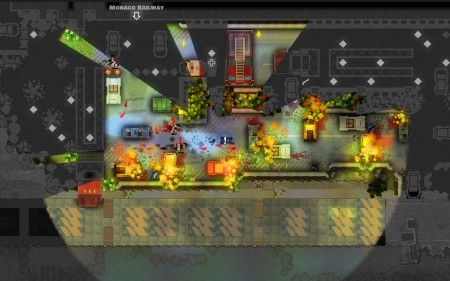 And when you’re smack dab in the middle of one of those schemes, you’ll find that each villain has their own strengths and can be way more useful in certain situations than others. The Lockpick, for instance, can jimmy locks and hack computers with ease, while the Gentleman can don disguises and fool pretty much anyone. There are a seemingly endless number of variables in Monaco involving the different characters, their strengths and weaknesses and the levels themselves.

And about those levels- they’re brilliant in design. Monaco is never going to be mistaken for a realistic looking game, but even though they may not look it at first glance, the stages that you and your gang of ne’er do well’s play through feel as real as the world outside your window. Each stage is laid out in a perfectly realistic way- in other words, a bank looks like a bank, a mansion looks like a mansion. Each one is populated with guards, civilians and the occasional dog that all have some very decent AI. In other words, if you trip an alarm you better run.

Though you won’t just be running as there are offensive weapons in Monaco. Firearms and clubbing weaponry can clear out a level in no time flat, providing you have enough ammo. You’ll pick up coins aplenty in the game and each successful cash grab works towards not only your score, but also towards keeping you in ammunition. How violent or how stealthy you want to be is totally up to you by the way. You certainly don’t have to shoot up the joint if you don’t want to. Conversely, provided you have the ammo you can make the guards go boom to your hearts content.

And speaking of ‘boom’, Monaco is no slouch in the looks department either. The game absolutely pops off of the screen with super-bright colors and a fantastic flair in levels that are loaded up to the gills with little details. They actually reminded me of a LEGO set at times for some reason- and that’s a very good thing by the way. It’s kind of retro looking in more ways than just the blocky pixels too as the splashes of color that play against the grayscale ‘blueprint’ of places on the map (area’s ‘gray’ out when your character can’t see them) are both very ’80s-esque and very attractive. 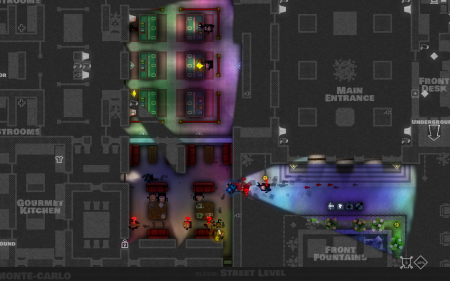 Even the audio is rock solid in Monaco. The musical score is perfectly heist-y with some really great, almost noire tones at times and the voice work is fun on the part of the guards and frightened civilians. That said, the simple cut scenes that start each mission are text based and don’t have any voice acting whatsoever. This is a little bit disappointing considering how great everything else looks and sounds in the game and I really would have liked to have heard my den of thieves arguing amongst themselves instead of just reading their words.

Not disappointing at all though are the controls. Monaco shines as a great example of ‘if it ain’t broke don’t fix it’. This is a top down action/adventure, which is exactly what it plays like. And it does it very well indeed with no clutter and a streamlined control set that does it’s best to keep you having fun. As a little bonus, Monaco is great with a controller and I’m pretty sure was designed with the Xbox 360 pad in mind.

I was ridiculously wrong about Monaco: What’s Yours is Mine and I’m thrilled that I was.

Even in it’s more frustrating parts, Monaco continues to be fun and enjoyable  and a great time. Sure there are some little things here and there and a few things that you could pick on that really don’t deserve a mention at all, but I seriously doubt that anyone will be overly disappointed with Monaco: What’s Yours is Mine.

It’s tremendous fun in multi and a great time in the single player too. A simple joy that’ll steal away a good deal of your free time.

The Technomancer (Xbox One) Review