One of the most interesting and complex characters in the Marvel Universe, Brian Wood and Greg Smallwood take over Moon Knight starting in issue 7. 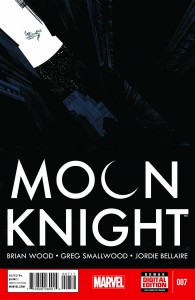 The hit series continues with a new creative team & a bold new direction this September in MOON KNIGHT #7! Eisner-award nominee Brian Wood (DMZ, X-Men) and critically-acclaimed artist Greg Smallwood (Dream Thief) pick up the reigns from Ellis & Shalvey and kick off the next era of Moon Knight with a bang and a blackout! Using all his cunning and gadgets, Moon Knight pursues a dangerous new foe through the  darkened streets of NYC!  Plus, those questions you’ve had since way back in Moon Knight #1? Answers will be revealed! The ‘weird crime’ smash-hit continues this September in MOON KNIGHT #7!

Normally, I don’t like to see a book get turned over creatively this quickly (it’s only the seventh issue remember), but it’s a different story when you’re talking about someone like Wood coming onboard. One of the hottest writers in comics today, Wood has not only penned a few tales in the mainstream that’ve raised eyebrows, but also his amazing run on Star Wars for Dark Horse and his book The Massive, which got all sorts of critical acclaim.

In short- he’s a pretty terrific writer and should take Moon Knight in some very interesting directions indeed. As for new artist Smallwood (that’s a lot of wood), his simple yet gritty style should infuse this already dark book with some pulpy goodness that fans should take a shine to. Personally, I still like the ‘superhero’ version of Marc Specter’s alter ego, but he does have something of a flair in a white suit and mask.

Catch Moon Knight #7 on the racks this September the 3rd from Marvel.

Hulk battles Xemnu on the cover of issue 33, Hulk’s 750th