The original Mortal Kombat was a revolution for fighting games and ushered in a whole new era of blood and guts. Oh, and it was a pretty good fighter too. 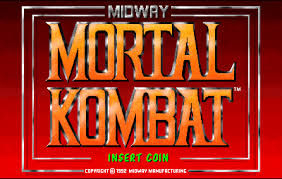 When I was younger, I was far and away a Street Fighter II guy. The way that Capcom’s masterpiece played and looked was such a joy that I considered it the pinnacle of fighting games and basically played it into the dirt many times over. At that time too, I eagerly awaited the next revision for the game (upgrades weren’t played out like they are now) and played plenty of it at my local pizza parlor, pumping quarters into the machine like a madman.

I know, I know, this is supposed to be a retro review for Mortal Kombat, but I wanted to give you all some background on my fandom before I really dug into the game in question. And although I was firmly in the SFII camp when it came to preference back in the early 1990s, it wasn’t too long till I noticed Midway’s ultra-violent Mortal Kombat lurking in the shadows, awaiting my coins.

I first got to play the game in a grocery store, arcade games were everywhere in the late-80s/early-90s you see, and occasionally they were found in some pretty odd places. Mortal Kombat was located in a grocer near a friend’s house, and it stopped me cold right in the middle of running around with my pals, pretending to shoot each other.

The machine was decked out with the MK ‘dragon’ logo, if I recall correctly, and had (I think) dual dragons across the top. And the graphics couldn’t have been more different than what I’d seen from Capcom and even SNK with their Fatal Fury and Samurai Showdown series, also in its infancy at that time (was that a great time for fighters or what?).

It looked so massively different than Street Fighter, I just had to drop a few coins in and try it out. Long story short- I got my teeth kicked in. I was never all that good at fighting games anyway (even though I loved them) and MK was no cakewalk. I played a few rounds as Liu Kang and Johnny Cage, loosing a couple quarters in the process. I had fun though, and that cemented me as a fan of what Midway had put together.

The graphics are certainly nothing to write home about today, but at the time they were cutting edge. Real, live people ‘played’ the parts of MK’s roster instead of hand-drawn sprites. I think I still prefer the latter to the former, but they certainly did stand out from the pack of fighting games cluttering arcades, and so there’s something to be said for that. The only real issue I had even then, with the looks of MK, were the animations. I always thought they were too stiff and kind of had an unfinished look to them.

Related Article:  Bungie to provide an update soon on the development of Destiny 2 in 2021

The gameplay was great though. In some ways, I actually liked it best of all the one-on-one titles of the time. That’s probably more due to the fact that I got half-way decent at the game eventually, but that’s neither here nor there. Each fighter had a stable of moves, including high and low punch and kick. That was also very different for the genre as most other titles had the standard three punches (light, medium, and hard) and kicks setup. Everything else was the same though, as you could crouch and jump as usual. There was that magical uppercut though, where you could send your opponent to the moon. That was always a satisfying event.

Pulling off the special moves like Scorpion’s spear and Sub-Zero’s ice blast was decently easy, but the signature fatalities always seemed a little too hard for my liking. As I said, I’m not and have never been a fighting game prodigy, but finishing off my opponent was always way too complicated and way too touchy for my liking.

Even now I have issues with them. And it’s more than just memorizing the button and directional presses that I have issues with, I just can’t get the damn things to work at all, even when I ‘know’ what I’m doing. It’s a good thing then, the the Fatalities were only a small slice of the MK pie. Sure they were cool and punctuated a match, but they were also kind of unnecessary as one of those uppercuts could fill in nicely.

As for the sound design, it was serviceable. The voices and sounds of kicks and punches worked well enough, even if it all came off as a little underwhelming. I did like the semi-cheesy tunes and the ridiculous things that some of the characters would yell out though, so points for that. Music and graphics are great, but in the end is was neither that first drew players to Mortal Kombat- it was the violence.

The gory Fatalities (sigh) and buckets of blood that poured out of the characters as they smacked each other around was something that you just didn’t see in that day and age. Now of course, that’s changed and the latest title in the series ups the ante in ways that would have been unimaginable years ago. But for what it was, it was eye-catching. And gouging.

Mortal Kombat was a good start for what would become one of the staple fighting games of all time, and one that grabbed countless gamers with its ultra-violent hook. Once that hook played itself out though, players found that there was a solid fighting game underneath, with interesting characters and lore, and one that would spawn an empire of some of the best and most played fighting games ever.

Maid of Sker review — Death in the slow lane