Mortal Kombat X is a glorious evolution for the bloodiest fighting franchise in gaming. 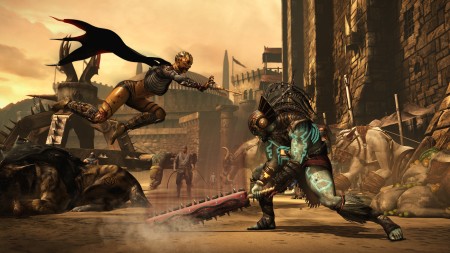 I’m going to start out with a little insight on my past with Mortal Kombat, skip down to the next bold text to read the actual review.

While our editor-in-chief Jason was spending a good many of his quarters playing Street Fighter, and a few on the original Mortal Kombat, I was busy not existing. Which is to say, I didn’t make my debut into this world until the dying age of arcade cabinets; they weren’t very prominent in the days of the later 90’s, so I only ever saw them at two places: the small arcade in the mall (which I never had the money for), and in a local pizza parlor.

There was only one cabinet in the parlor and I remember it very fondly, for it was Tekken 2. I remember the, at the time, catastrophic day when I went to the restaurant only to find out they had replaced the cabinet with something my virgin eyes and ears had never seen nor heard of… a strange game called Mortal Kombat.

I was never allowed to play Mortal Kombat of course, which was like putting salt in the wound of losing Tekken 2, and a bit later, Mortal Kombat: Deadly Alliance released. My brother’s best friend was one of the first people in line at the local EB Games, and brought it down right after buying it. I remember Deadly Alliance the most, because it was the first 3D Mortal Kombat game I had ever seen.

Deadly Alliance also marked the first time I had ever seen the infamous ‘fatality’, Reptile’s to be exact. I snuck into the front room where my brother and his friend were playing, while no one was looking, and hid beside the couch (though, they probably saw me, and just wanted to teach me a lesson).

I remember seeing Reptile, who is now my favorite Kombatant, and watching him spew acid everywhere, then the blood and gore erupting. My four year old mind was blown, and I wasn’t sure how to react. Knowing myself, I probably ran to my mom, crying.

Over time, the trauma of witnessing my first fatality turned into intrigue, and then appreciation, and shaped me into the Mortal Kombat fan I am today. Also, I wanted to mention it but never found a spot, so I’m just going to shoehorn it in here, but the first MK game I was allowed to play was Deception.

Well, after taking up nearly an entire page talking about my past with the Mortal Kombat series, I think I’ll get on to the point of this entire thing: Netherrealm’s newest baby, Mortal Kombat X.

I’m just going to put it out there now, that gameplay-wise this is the best MK game I’ve played to date. The combos flow wonderfully, and while the fatalities are definitely the easiest to pull off yet, they aren’t all an easy combination. Speaking of easier fatalities, yes it is true that NetherRealm does sell consumable ‘easy fatality’ DLC, but it really isn’t needed as many tombs in the Krypt (which I’ll get to in a minute) contain such tokens.

To boost difficulty, NetherRealm has resurrected something far more impressive than a mere fatality. I’m talking about the infamous ‘Brutalities’ of course, where you wail on your opponent in a flurry, beating them into submission. And let me tell you what: I have yet to pull of a single one of these, and I would consider myself a fairly avid fighter.

The Krypt has made it’s return in X as well, and to be honest, it’s one of my favorite parts of the game. While it was kind of cool in 9, it wasn’t nearly this fleshed out, feeling almost like another game in and of itself (seriously though, a tile based Mortal Kombat game would be pretty sweet). Within the Kyrpt, you’ll find countless tombs, on which you can spend your hard earned Koins on cool concept art, extra fatalities, brutalities, character skins, and more.

During your time in the Krypt you will also come across iconic pieces of equipment, such as Scorpion’s spear, Kung Lao’s bladed hat, and Raiden’s staff. Each of these will unlock a new area of the Krypt, and as such, will open up more graves for you to purchase and pillage for more goodies (is it pillaging if you purchase it first?). While the Krypt is a fun addition, the story of MKX’ campaign is surprisingly good.

This particular story begins two years after the defeat of Shao Khan. Shinnok, a fallen Elder God, unleashes a full blown invasion of EarthRealm, and attempts to poison the Jinsei (Earth’s life force), but his plan is thwarted by Johnny Cage, Raiden, and Sonya Blade… oh yeah, and Kenshi was there too… I guess. Raiden imprisons Shinnok within his own amulet, where he would supposedly remain for all eternity… yeah, let me know how that turns out for you.

Over the next twenty-five years Johnny and Sonya did a Babality and had Cassie Cage. By this point, Sonya has become the General of the Special Forces, and Cassie worked to become a sergeant, in charge of her own SF team, consisting of Kung Lao’s younger cousin Kun Jin, Jax’s daughter Jacqui, and Takeda Takahashi (Kenshi’s son).

OutWorld necromancer Quan Chi starts up his old business of being a butthead however, and attempts to summon Shinnok by acquiring the help of Mileena. Mileena, at the moment, is in revolution against the current king of Outworld, Kotal Khan. That’s all I’m going to say about the story, but honestly, if that hasn’t captured your attention, then you’re expecting way too much story from a fighting game.

Obviously though, the main draw to MKX is the multiplayer. And aside from the usual fighting game modes, this time NetherRealm has added Factions, which add a whole new element to the game. From time to time there will be ‘Invasions’. These are faction based towers and challenges, as well as an interesting take on boss fights. From what I gather about the boss fights is each player in their respective faction gets thirty seconds to pound on the boss, and whichever factions beats their boss first, earns the reward, whatever that reward may be.

Towers are also of course making a return, and I must say, I love the system they have set up. There are a few different types of towers, Hourly, Daily, and Monthly, each of which change and update on their stated time. There is also rumor of Special towers, which come out on holidays and special events, though I’ve only heard that mentioned once or twice.

Another interesting change are the player banners. Most games have player banners by this point, you know, the bars with your name on them and an icon and background? Well, MKX fancies that up a bit and brings into play bonuses. Each background, icon, and border grants a specific bonus, such as extra Koins upon a fatality, or extra XP or Faction Experience on a victory or an X-ray attack. This new element adds more incentive to complete the Krypt, as you can find all of these things in certain graves throughout.

I’ve sunk just about all of my free time into Mortal Kombat X since its release Tuesday, and intend to continue sinking my time into it well into the season pass and afterward.

With Jason Voorhees coming later this month, and Predator around the same time next month, as well as the constantly updating towers, faction wars, Krypt, and everything else, I don’t think I’ll be seeing much of anything besides blood and gore for quite the while.

If I don’t see the word “Fatality” on my eyelids as I lie with my eyes closed at night, I haven’t been playing enough.

Gears of War’s IDW debut is already a sell-out