Due to the popularity of console-centric racing games, like the Gran Turismo, Burnout, Need for Speed, and the Forza franchises, it’s been a very long time since I last played a driving game on the PC. In fact, I think the last time I played one was circa 1990 Test Drive. (Holy cow! Had it really been that long?)

NASCAR: The Game 2013 – the title won’t win many awards, and to me it sounds like the stock car racing equivalent of the video game adaptation of a movie, but it gets the general point across. But there is more to the game that driving in circles!

I’ll be honest and upfront from the start. I don’t watch NASCAR. I don’t have a favorite driver, and when they introduced Toyota models, many years ago, my head didn’t explode because of the controversy. At the same time, I don’t hate NASCAR or dislike it. I live in a small town where one doesn’t have to go far to see NASCAR decals on the back of the locals’ cars and pick-up trucks. I’ll casually watch it for a bit, if a weekend race is on, but that’s about it. However, I do like a fun and enjoyable racing game, and I have three sons, all of them appreciate loud and fast cars. NASCAR has both.

When I was asked to review NASCAR: The Game 2013, I wasn’t quite sure I was going to end up liking what I was about to get into. I’m always skeptical about the quality of a video game, when it’s based on a popular licensed name or product (the aforementioned video game movie tie-in comes to mind).

I’m happy to say, that I was pleasantly surprised. First, off, NASCAR is a nice-looking game. The PC that I reviewed it on isn’t anything spectacular. It’s your normal, middle-of-the-road Intel i5 processor system, using the built-in Intel video card. But even on this mid-level PC, the visuals looked nice, if not slightly better and crisper than some of the graphics on the Xbox 360 and PlayStation 3. I could definitely see the potential of having an utterly beautiful racer if NASCAR was running on a beefier system with a high-end video card.

One of the nice things about NASCAR: The Game 2013 is that it offers more than just “left turns.” Yes, you’ll spend a fair share of doing that, but I was impressed with the other modes and features that were available. Career Mode is the game’s main mode, allowing you to become the next NASCAR legend, view and upgrade your car, earn sponsors. The game’s Single Player mode is more of a quick-play mode allowing you to jump into a race, or play (drive?) through a single season. If you’re in for the long haul, this is the mode to play.

The Paint Booth is akin to Forza’s vehicle customization allowing up to 1200 layers of decals text and images. (Plus it’s way easier using a mouse and keyboard.) Hey, if you’re gonna be good, you’re gonna have a lot of sponsor swag on your car, right?? 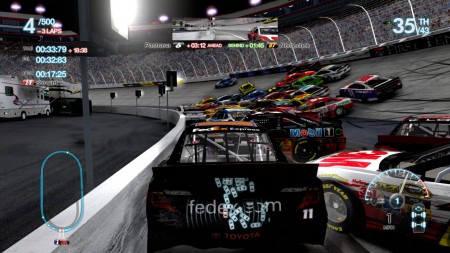 NASCAR: The Game 2013 also includes My NASCAR where you can go to view your stats, online leader boards, photos, and replays. The only mode that I didn’t dig into was the Multiplayer mode. I’m not a huge competitive gamer, and I apologize if you came here looking for multiplayer impressions. I figured it’d be better for me to be honest and up-front about it, rather than giving a uninformed opinion. 🙂

Especially nice in NASCAR are the loading screens, which display interactive NASCAR trivia. If you’re going to have to wait a few moments for a race to load, you might as well have something entertaining to fill those brief moments. (And for the record, the loading screens never felt excessive or too long.)

One of the “limitations” of NASCAR: The Game 2013, when compared to other popular racing games is the choice of car. You’re pretty much limited to Chevys, Fords, or Toyotas. In addition to traditional NASCAR racing, players will be able to experience iconic NASCAR racing moments that have occurred over the last few years, by getting in drivers seat.

I’m having a hard time trying to decide if I would recommend this game, without towing the cliched line of “If you’re a fan, this is a must buy.” But in all honesty, I think this is one that NASCAR fans will benefit from the most.

As I mentioned at the beginning of the review, I’ve been playing racing games on the console for as far back as I can remember, and over the last several years, the racing genre has changed quite a bit. I remember the day when a hardcore racing simulator like Gran Turismo was all you needed. You started from the ground up, with a dinky little car, put it thorough the same races over and over until you could afford better upgrades or a newer, faster car and rinse-and-repeat.

Today, while I won’t exactly call it the “dumbing down” of the genre, gamers seem to be more open to accessibility in their racers, whether that’s a free-play mode where all of the cars are unlocked from the start, a rewind feature to correct that horrible spin-out in hour two of an endurance race, like in Forza, or the ability to drive around and collect unlockables like in Burnout Paradise and Need for Speed Most Wanted. Because of that, I worry that hardcore simulators may be too imposing for a casual racing fan.

NASCAR: The Game 2013 simplifies the races, not requiring you to do 200-some laps, but it also feels like an edgier-more robust racer that sort of rides the line between a casual and hardcore racing sim. It feels more like a PC game than a console game, if that comparison still carries weight today.

It’s a lot of fun, but I really do feel like this is a game for NASCAR fans. Casual racing gamers’ experience may vary.

A digital Steam copy of NASCAR: The Game 2013 was provided to us for review.

NASCAR: The Game 2013 is a robust PC racing simulator, with a bounty of additional modes and features outside of the familiar circular racing. As someone who enjoys the accessibility of the modern console racer, like Need for Speed: Most Wanted and Forza Horizon, I’m not sure that I would have chosen to play this on my own if I didn’t have the privilege of being offered the review as a writer for Brutal Gamer. That being said, NASCAR feels a bit more like a serious racing simulator than a casual racer, and therefore feels more like “a PC game” than “a video game.”

While I think there is a lot in here for all racing fans, I think the ones who will get the most out of it are the NASCAR fans.