Neon Genesis Evangelion: The Shinji Ikari Raising Project is definitely one of my favorite series to follow. Volume 17 is one of the best entries in the series because it changes things up in a very big way.

Shinji Ikari Raising Project is a side-story based on the world of Neon Genesis Evangelion. The key-difference is that it while it maintains some of the key elements of the story, none of the traumatic stuff is present. This is a light-hearted approach to the Eva meta and it’s definitely a welcome one. 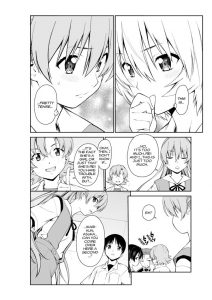 The style of the visuals haven’t changed much and that’s definitely a plus for old-school Eva fans. The best thing about the comic book series is that it maintains consistency. Not everyone can appreciate the appeal of Japanese manga but this particular book entertained me for a good hour.

I mentioned consistency earlier because that’s one of the best parts of the series. The art style conforms to the original Evangelion series and this evokes a sense of nostalgia that everyone who loves Eva enjoys.

Related Article:  The Last of Us to get comic series

The art is definitely one of the best aspects of this side-story.

The the main thing about the Shinji Ikari Raising Project is the love triangle between Asuka, Shinji and Rei. That’s a key element that carried over from the main show. While Shinji and Rei should definitely not end up together in the main show, SIRP is a whole ‘nother story. Literally. 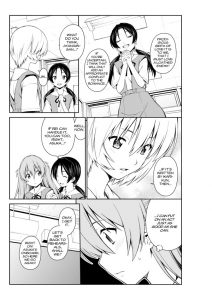 Before Volume 17, the shenanigans that the crew faced was pretty standard. It was basically Asuka fighting with Rei over Shinji with the person in question mostly acting in a passive manner. Volume 17, however, changes things up by completely eliminating Shinji from the equation with the romance focusing on Rei and Asuka!

Of course that’s not the entire story. Volume 17 also builds up the promised “kissing scene” between Rei and Asuka pretty well. It starts out as their class preparing for a big play, but somewhere down the line things get a little yuri between the two rivals. Some fans might like that and some fans might not.

Without spoiling anything, I can confidently say that I definitely enjoyed how they pulled it off.

If I have to complain about anything, then it’s the fact that some of the jokes are getting bland. It happens to even the best of them (Gintama, even) and this series is no exception. I know for a fact that the next volumes are going to up the ante in terms of comedy and storytelling so that’s a relief.