Nevermind is shaping up to be a fright, and that’s a very good thing.

Do you ever lay awake at night, thinking about your past mistakes or worrying about the mistakes you’re going to make in the future? Perhaps you lay awake, but with your eyes squeezed tight because you’re afraid that if you open them, you will peer straight into the eyes of an ungodly terror. Have you ever repressed a memory which, when you think about it, cuts into the very fabric of your soul? Apparently so have the psychopaths over at Flying Mollusk, developers of one such Nevermind.

I was incredibly excited for Nevermind, from the very first moment I heard about it. I mean, c’mon, a horror game designed to make you as terrified as physically possible? What’s not to love? I will say that I wasn’t disappointed by Nevermind in any way, I absolutely adore it, but it definitely wasn’t what I was expecting, and that can be good or bad depending on how you look at it.

The plot is fairly simple, though I assume in the full release, things may get more complicated over time. You are Dr. (insert your name here), a ‘Neuroprober’, which is a type of physician. You use a machine similar in idea to the Animus from Assassin’s Creed to enter the minds of your psychiatric patients. You do this in order to help them uncover repressed memories, so that they may understand them and face the truth.

I forgot to mention this before, when the game begins, there is no hint of horror, the offices in which the game takes place are decorated with serene miniature gardens and ponds; certainly a place I would love to work. Basically what I’m saying is that the game doesn’t just throw you in blind, like most horror games. There is a great amount of buildup, complemented greatly by peaceful piano tracks.

There is very little, currently, in the game that is actually dangerous too. In fact, I never died (even when I tried to die). It’s an incredibly cinematic experience, though I suppose after further updates a greater danger will be added to the game. The lack of actual danger however, does not subtract from the frankly gigantic sense of danger. For instance, at one part during my playthrough I was making my way through a freezer filled with body bags. I was stressed completely during this whole part because I felt that at any moment something would reach out and grab me, both in the game and real life. 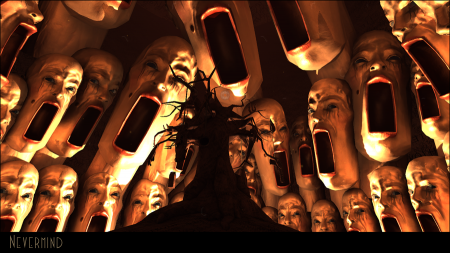 I briefly spoke about the music before, but it really does play a major role in the game (as it does, most games). As I said before, the piano complements the quiet beginning of the game, but what about when you’re being a mind-pirate (thumbs up if you get that reference)? Well, typically the game reverts to a less-than-calm music box sound, or the occasional spazzing violin… yes these are all good things.

While I admit that I am skeptical of most early access games, I’m really looking forward to seeing what Nevermind does at full power. If I could afford the frankly exorbitant price of a bio-feedback sensor for my computer, I would most definitely add it to my shopping list, as Nevermind makes apparent good use of that hardware in play. However, as a reviewer/previewer my job is to tell you whether or not I thought the game is worth the price or not, and the answer right now is no, simply because there’s not enough there.

At it’s current state, Nevermind is $25, and only consists of two levels, one of which is a tutorial. And at this moment in time, the game is only about an hour (maybe less) long. Do I think Nevermind is fantastic? Yes. In fact, I made the comparison that Nevermind may very well be the next Silent Hill, if it plays its cards right and doesn’t get caught in Early Access hell, it’s just that I’d just wait a bit longer to plunk down the cash for it.

Nevermind is scheduled for a full-on release this Fall for the PC and Mac.

Preview: The Harbinger brings Valiant’s super-team back to comics