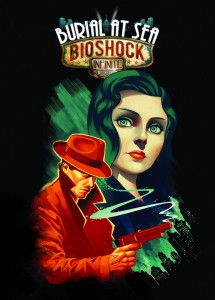 A doubly unexpected announcement was made by BioShock creator Ken Levine on Polygon today as he revealed all three of the game’s incoming downloadable content packs.

The first is actually out right now and is titled Clash in the Clouds. The offering is effectively an arena-battle scenario and pits you against waves of baddies designed to test your gaming might. You’ll have access to all the powers and upgrades from the main BI experience as well as use of the Skyline and Tears that you can rip open and exploit. From the sound of things, you’re going to need every bit of what you get as Clash in the Clouds is designed with maximum difficulty in mind. Not for the faint of heart, this one.

As for the second issuance of downloadable goodness, that’s a different matter entirely… well, actually, it’s two matters. Buried at Sea is a straight up return to the Rapture of the first and second BioShock games that’s set right before the fall and following war of Splicers that gamers got to experience already. This is Rapture in its heyday with all the glory of Andrew Ryan’s creation more or less intact.

So are you playing as someone new in this all-new adventure? Nope- you’re stepping back into the shoes of none other than BioShock Infinite protagonist Booker DeWitt. And this doesn’t appear to be the Booker from the Infinite timeline either as he’s a private eye in the city under the sea. As for Elizabeth, she’s not only present and a big part of Buried at Sea, but the star of her own complete adventure as she’ll be the focal point of the third DLC pack and second part of Buried.

Warning: Super-spoilers follow in the next two paragraphs for BioShock Infinite’s ending! If you haven’t played and beaten the game, you might not want to read on.

So a few things that hit me right away and were also mentioned in the Polygon piece- the whole ‘Elizabeth is a Little Sister’ and ‘Booker is Jack’ train of thought kind of goes out the window at this point. At first, it seemed like Jack and Elizabeth were other dimensional versions of characters from the original BioShock when Liz opened the rift into the Rapture universe. Apparently that’s not the case though as here’s Book and his companion, fully integrated into the land of Andrew Ryan and the Big Daddies.

Also interesting is that the ‘AD’ mark is still tattooed on Booker’s hand. AD stood for the former Pinkerton agent’s daughter, Anna DeWitt. That being the real identity of Elizabeth in the main BioShock Infinite game. It would imply that Elizabeth is still a DeWitt here in the Rapture timeline- an interesting development that somewhat causes the mind to form into the shape of a pretzel.

There’s no release date as of yet for Buried at Sea, but Clash in the Clouds is available now for the Xbox 360 and PC versions of BioShock Infinite with a PSN version due tomorrow.  If you’re still on the fence about what’s definitely one of the biggest Game of the Year contenders, then you might want to check out our review of BioShock Infinite here.

Source: Polygon (go read through their article if you’re into BioShock, there’s lots more info about the DLC packs and BioShock in general)

Infinite Crisis gets a pair of new combatants