DST has a pair of new releases in stores that couldn’t really be more different. One is the kindly robot from Lost in Space, and the other is a giant green rage monster named Hulk. It’s like the odd couple!

I have to admit, other than watching Lost in Space a bunch as a kid, I’m really not what you’d call a fan of the show. I guess it was just a little too before my time for me to really get into it in any meaningful way. While that’s true though, even I have to admit that this is one super cool robot toy.

Other than just being a classic in every way, which I think any sci-fi fan can appreciate, B9 is quite the awesome figure here from DST. He lights up, he’s poseable (which is no easy feat for him), and he’s got a ton and a half of phrases from the show. Pretty awesome all around.

Lost In Space Electronic Lights & Sounds B9 Robot
Danger, Will Robinson! DST is known for their incredibly detailed electronic cars and starships, and now they’ve built their first-ever electronic robot! This 10-inch rendition of B9, the friendly helper robot fromLost in Space, features lights and sounds taken straight from the classic sci-fi TV show. Lights on his head and chest blink constantly while B9 is on, and additional lights and dialogue are triggered with the push of a button, including “I will accompany you, you may need protection,” “Cannot compute, programming data insufficient,” and his famous cries of “Danger!” You can also manually raise and lower his head, open and close his claws, extend his arms and turn his torso to the left and right. He even has wheels so you can roll him around! Comes packaged in full-color window box with try-me feature. (Item #AUG142281, SRP: $49.99)

B9 speaks the following dialogue:

“The function of an environmental control robot is to supply all data pertinent to this particular field.”
“Cannot compute, programming data insufficient.”
“I will accompany you, you may need protection.”
“Due to worn condition of memory bank, compliance impossible.”
“My power supply is getting very weak.”
“Emergency! Emergency!”
“I am a cybernetic servo mechanism and computer.”
“Affirmative.”
“Astronomical scanning data indicates that you are now observing Omega Nebula!”
“It would be against the prime directive of robotics to expose human beings to danger of any kind.”
“Warning! Warning!”
“Launch time, T-minus 1 minute and counting.”
“I do not sleep, it is not one of my functions.”
“Danger Danger Will Robinson!”
“I must warn the others there is a dangerous alien among us.”

And then there’s Hulk.

One of the biggest movies of the year already, Age of Ultron has been out for a little over a week and has cleaned up at the box office. A big reason for that would be the big guy here. Hulk may not have what it takes to enrapture audiences enough for a solo flick, but in the Avengers films, he’s pure gold. Well, green gold anyway.

This new figure from DST features the big guy in his duds from the flick, and sculpted by Gentle Giant. 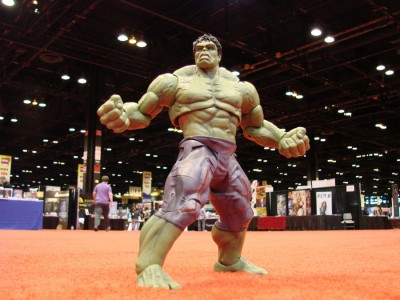 So there you go, two new toys in stores from DST, and both of them pretty dang awesome.