Luigi has been enjoying a nice and cozy spotlight this year with three great games that he gets the spotlight in. Just how well does the final game in the year of Luigi turn out? 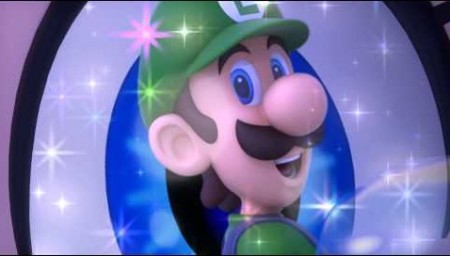 New Super Luigi U starts out just like New Super Mario Bros U does, except for one important detail, his older brother is missing. In his place is the mischievous Nabbit, who was previously causing trouble in the Mushroom Kingdom, stealing various items from toads. Now he’s here to assist Luigi and his two toad companions as they rescue Princess Peach from Bowser‘s clutches. The story is what you would expect from any Mario or should I say Luigi game. It gives you an excuse to go on an epic adventure through the mushroom kingdom, what more could you possibly ask for? 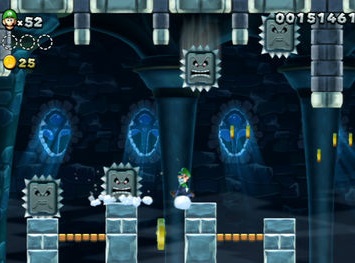 Mario’s younger brother does surprisingly well on his own, in fact one would argue that this adventure was made for him. The levels seem to be crafted for the way Luigi handles. He controls much like he did in Super Mario Bros 2 USA. He has his flutter jump that propels him high in the air, allowing Luigi to stay afloat for a good long time; Luigi also has his usual lack of traction as he slides along the ground as if someone rubbed Crisco on his shoes. Nabbit himself is an interesting twist to the game as well; he can’t be killed any obstacles or enemies and cannot use items. However, he can still die if he falls down pits or into lava. So he’s a real asset for beginners or people that just aren’t all that good to begin with.

Make no mistake, it may look similar, but this is indeed a completely different game than New Super Mario Bros U. The levels are shorter, but many are significantly harder, and all of them have a time limit of 100 seconds. Sometimes it can be a bit of a pain because there are certain star coins that demand much more time than the allotted duration, but many would argue that’s part of the challenge, which is understandable. Still, it would have been nice if some of the star coin searches were ironed out, as you found yourself going through a few levels a good 7 or 8 times over just to get all 3 star coins. Of course, sometimes it was actually quite thrilling, because despite the shortness of the stages, they cleverly hid the star coins. Exploration really wasn’t hampered by stage length, it’s just that time limit somewhat cut into that.

The levels themselves really remind you of the older Mario games, which is a refreshing change from the really big and often times a little too easy levels in recent New Super Mario Bros games. Like the old Super Mario Brothers games, these levels being as short as they are, seem to demand more challenge just to lengthen the amount of time the player will spend replaying them. I found this to be especially true in the ghost houses, as they littered the stages with circles of boos that were actually quite difficult to dodge. Considering the fact that I haven’t had trouble with ghost houses since the occasional playthrough of one in Super Mario World, this was quite naturally a pleasant surprise.

If Superstar Road wasn’t enough for you in NSMBU, then you’ll be happy to know that it has gotten even harder in NSLU. The levels are brutal, especially fire bar sprint. In fact, I would go as far as saying that one was painfully difficult. I found myself going back to that stage over and over again just to collect all of the star coins, this level eclipses even world 9-7 in New Super Mario Bros Wii. It’s a mixed blessing though, as some of it felt overly frustrating to the point of not being fun anymore. As cool as fire bar sprint was, some of the challenge seemed artificial rather than legitimate.

If you were hoping the bosses changed, then you’re out of luck. They remain exactly the same as they did before. Mario games were never known for their good boss fights save for the final confrontations, so this isn’t exactly a downside as much as it is to be expected. The quality of the bosses are identical to what they were in NSMBU. The maps themselves have remained the same as well, which is just fine considering the fact that New Super Mario Bros U had a very nice map layout. There wasn’t much sense in changing it. Needless to say the music in New Super Luigi U is identical to New Super Mario Bros U, which is to say it’s average at best; but then the only Mario games that ever really have spectacular music are the 3D titles.

New Super Luigi is in my humble opinion the best that the year of Luigi has to offer. It’s a traditional gift to fans that harkens back to the arcade era, when video games were shorter and more challenging. In a way it reminds us exactly where Luigi came from. He didn’t start off in an RPG where his brother jumps into his dreams, and he certainly didn’t start off wielding a vacuum in ghosts either. He started off in Super Mario Bros, Mario’s brother and a plumber just trying to save the day.

That Wii U Zelda game? It’s going to be big