Tindalos’ RTS goes to the red planet in this new round of screens. 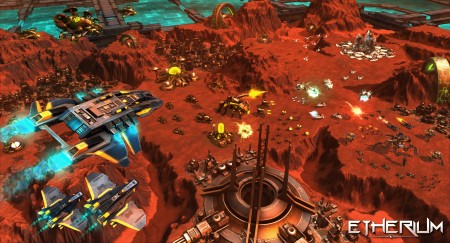 I’m more than a little surprised to see Mars entering the picture in Etherium as I had kind of thought there would only be fictional worlds showcased in the game. But here we are, on the first world that humans explored (other than their own) and the home of a massive amount of the rare mineral that the game is named for- Etherium. Think mankind is going to give it up without a fight?

As you battle across Mars during the conflict between the Consortium, the Intari and the Vectides, you’ll actually come across set-pieces that show off the former mining operations that went on on Mars. Hundreds of years before the story starts in the game, Mars was an industrial center, as humans mined Etherium by the ship load; during the game itself though, it’s a wasteland and pale imitation of what it was. Cheery!

Anyway, Etherium continues to look fantastic and the new website (just launched this week) has all the info that you could want about the game and the deep sci-fi universe behind it. Click here to check it out and then get set for the third quarter of this year (which starts next month), as that’s when Etherium hits the PC.