Headlined by an amazing looking NES flavored console, the good old 3DSXL is getting a trio of new looks. 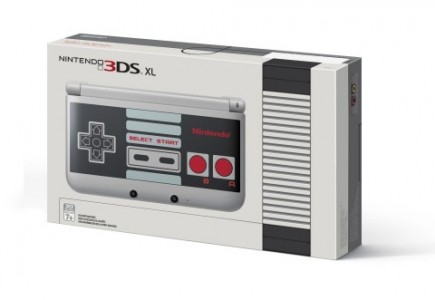 “More than 12 million systems in the Nintendo 3DS family have been sold in the U.S. alone,” said Scott Moffitt, Nintendo of America’s executive vice president of Sales & Marketing. “These new models give shoppers even more choices during the holiday shopping season. Based on past experience, these special editions likely won’t stay on shelves for very long.”

“We expect these new special-edition designs to be in high demand,” said Michael Turner, director of merchandising at GameStop. “Nintendo 3DS is a great kid-friendly gaming device with excellent games, and we are pleased to share that these new designs are available for pre-order starting today.”

Oh is that a tempting little handheld right there. Chances are that, if you’re a handheld gamer, you’ve already got a 3DS. Even so though, Nintendo has a way of producing repaints and re-decos that can pull fans in for a second (or third…) console. Decked out to look like an NES controller (and with a box that mimics the actual NES console), this definitely counts as one of them. A GameStop exclusive item, you won’t have to wait too long either to grab one, as they’ll be hitting the stores this coming October.

The NES Edition Nintendo 3DS XL isn’t the only new 3DS on the way either, as there’ll also be a very nice looking Super Smash Bros system on the way as well as a Persona Q edition unit. All three will be hitting from September through November and all three will cost you $199.99 USD at retail.

Here’s your full breakdown of what’s in the boxes:

Dystopian Wars takes oceanic war-gaming to the tabletop next month

Nintendo delivers Lolo, Chariot, and more to the eShop this week