Ninjas, zombies and tons of slicing ‘n dicing- all wrapped up in a brand new digital comic. 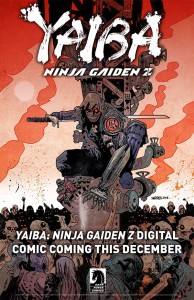 Keiji Inafune, Team Ninja and Dark Horse Comics are teaming up to being the forthcoming Ninja Gaiden spinoff, Yaiba Ninja Gaiden Z, to comics. The book  will see digital publication with a three “vignette” run and will be written by Tim Seeley and Josh Emmons, with pencils from Rafael Ortiz.

As for the story that the vignettes will tell, we know all three will tell stories that’ll be “essential pieces” of the narrative… and it’s going to be kind of dark.

In Yaiba: Ninja Gaiden Z, players will battle fierce zombies as Yaiba, a cyborg ninja who will do anything to get revenge and stay alive. After being cleaved in two, he is brought back to life with cybertechnology. Brandishing his ninja sword and the mecha weapons in his cyborg arm, he slaughters zombies with brutal, over-the-top abandon.

Step into Yaiba: Ninja Gaiden Z, where stunning graphics depict a world gone mad. Hordes of undead can only be stopped by Yaiba’s willingness to use any means necessary to get the job done. Will he kill by turning his cyborg arm into a razor chainsaw for slicing up the undead—or just rip off an opponent’s arms to use as zombie nunchucks? Both possibilities fill Yaiba’s heart with twisted laughter—and the desire to kill more and more zombies!

Yaiba: Ninja Gaiden Z will be a free download through the Dark Horse Digital storefront or through the Dark Horse mobile app. Watch for it some time soon. Yaiba in video game form should be along for the Xbox 360, PS3 and PC early next year. Dark Horse will actually have a little something on physical shelves in time for that too with an all-new comic on the way. No word yet on just what that might entail, but we’ll let you know.

Dark Horse’s Polar: Came from the Cold headed to the big screen