J. Jonah Jameson and the Bugle are on his case, other heroes don’t want to be associated with him, and there’s a new (old) villain out to shatter his eardrums. So, typical day for Pete. 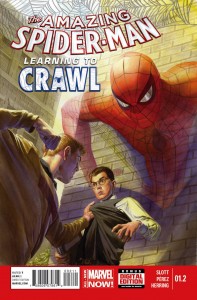 Spider-Man is a menace! Today, Marvel is proud to present your first look at AMAZING SPIDER-MAN #1.2 – the next exciting chapter of Learning to Crawl from New York Times Bestselling writer Dan Slott and Eisner-award winning artist Ramón Pérez! J. Jonah Jameson warned us! He said that kids would try to emulate the Amazing Spider-Man and he was right! Enter New York City’s newest menace – CLASH! He might have been one of Spider-Man’s biggest fans, but now he’ll become one of his worst enemies. Harnessing the destructive power of sound, Clash is about to tear his way through New York City and into a permanent place in Spider-Man’s rogues gallery.

Wanted by the cops, denied by the Fantastic Four, and flunking school – Peter Parker is no hero – yet.

Learning to Crawl definitely has the feel of a Year One story, but with some neat curveballs that you probably wouldn’t expect to find. New villains really aren’t something that most origin retellings have after all, and Clash is a pretty cool one to boot. We also get to see Spidey at his most iconic here- hated by just about everyone and struggling to keep his civilian life together. Good stuff if you’re a longtime fan of the web-head.

Check out the next installment of Slott and Ramon Perez’ Learning to Crawl when it swings onto the racks next month.

This War of Mine launches this month, looks amazing