Shuffle Up and Deal! 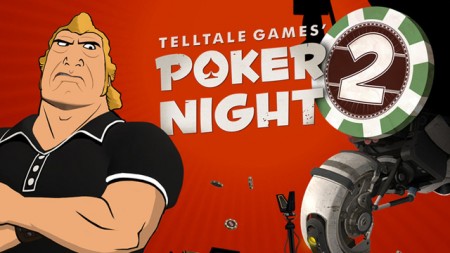 Telltale Games brings a laugh out loud funny game of high stakes poker right to your living room. Featuring some true fan favorites from various titles as your opposing players, the table talk in Poker Night 2 is just as interesting (if not more) than the actual gambling. While there isn’t a whole lot more to the game than a standard tournament poker setup, the use of great personalities, cartoony graphics, and winnable extras makes for a really fun game.

As you begin the game, you are led down to an underground poker club called the Inventory. Captain Reginald Van Winslow from Tales of Monkey Island is your host, and he’ll pop up often to give you tips and guidance. Each player buys in for the same amount, and the games begin. Your dealer is the immediately recognizable GLaDOS, of Portal fame. While she is off-screen most of the time, she’ll pop right into your face once in a while in order to taunt you more effectively. 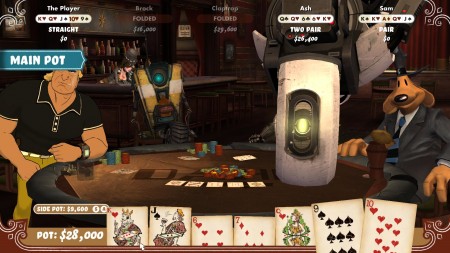 While your character is never shown, the other players at your table give you plenty to look at. Brock Samson from The Venture Bros. (voiced by the hilarious Patrick Warburton) sits to your left. Next to him is the unforgettable Claptrap from Borderlands and Ash Williams from The Evil Dead films – not a video game, but an iconic character nonetheless. Sadly, Ash is not voiced by Bruce Campbell, but you’ll love the constant Army of Darkness references anyway. Finally, you have Sam from the Sam & Max games (Max does not play, but he does hang out at the next table to keep Sam company). Mad Moxxi from Borderlands also makes an appearance, as the bartender.

Honestly, with that kind of cast (all playing perfectly in character) it doesn’t even matter what you’re playing – it’s bound to be hilarious.  And it really is. There is constant table talk, from idle chitchat to the expected mockery of your playing, and you can even buy your fellow players a drink to make them easier to read. They each have “tells” that should help you in your betting, but they aren’t particularly difficult to play against, as long as the cards are in your favor. 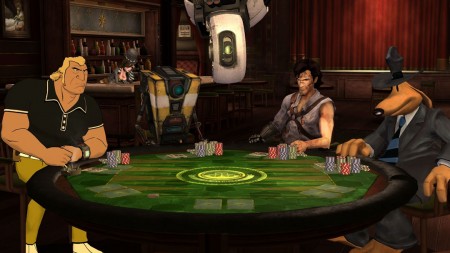 You have the choice between two different types of poker: the popular Texas Hold’Em or Omaha. In Texas Hold ‘Em, you have two hole cards, and the dealer deals out five cards onto the board, with betting in between each. Omaha is similar, with each player having four hole cards – two of which must be used in your final hand. Whichever game is your poison, you’ll play for the same items and extras.

By participating in tournaments, you’ll earn tokens that can be used to purchase table extras. These include different chip, card, and felt designs in each of the themes from the characters (Borderlands, Sam & Max, etc.) You can also play for special item unlocks. These are put up at the beginning of the tournament, and if you win the tournament you’ll also win the items – Borderlands 2 skins and heads, as well as avatar items. 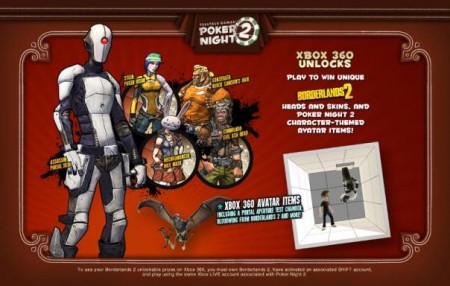 Bottom line, Poker Night 2 is a lot of fun, and you’ll find yourself guffawing at the screen quite often as you play. That being said, at its heart it is a simple video poker game, and as such will likely lose its luster right about the time the players’ one-liners start to sound a bit repetitive. Poker Night 2 is just not a game you’ll put 100 hours into.

What it is, is a game that you will wholeheartedly enjoy for a while, and it’s well worth the price of admission for just that. Telltale Games has made masterful use of some iconic characters, and delivered a truly memorable game.

Stranger Things Volume #1: The Other Side (Comic) Review

Xbox One X enhanced goes list now at over 130